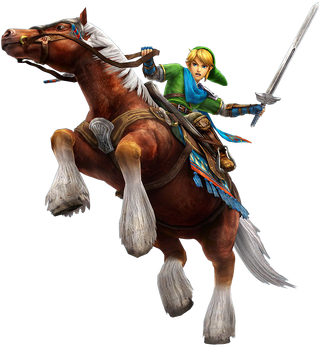 Defeating Enemies
The Horse is a class of Weapon used by Link in Hyrule Warriors. It is associated with Light.[1]

This Weapon has Link ride an incarnation of Epona, allowing him to trample enemies that are in his way and attack while on horseback using the Hylian Sword.

The default Horse is Epona. This form models Epona after her incarnation that appears during Link's Hylian Sword victory scene.

The second form of the Horse is Twilight Epona, which is modeled after Epona's incarnation from Twilight Princess.

The third form of the Horse is Epona of Time, which is modeled after Epona's incarnation from Ocarina of Time.

Link raises his sword skyward, then charges forward on Epona with the sword pointed forward, trampling enemies along the way. After a short distance Epona halts, and Link delivers one final slash to the enemies carried forward with him. This attack targets enemies directly ahead of Link.