Can be ridden
Pull carts

"...we could not keep them safe from the monsters on the road without a horse and cart..."
— Renado

Horses are a recurring race in the The Legend of Zelda series. They are often ridden and utilized in other ways by other races.

Rebonack, the boss of Island Palace, utilizes what appears to be a mechanical horse to charge Link during the first phase of the battle. After enough damage is dealt the horse will flee leaving Link to fight Rebonack like an ordinary Iron Knuckle.

Horses are found predominantly at Lon Lon Ranch. Most of the horses are dun to chestnut in color with black masks and legs. When Link goes there as a child he can see the filly Epona and learn "Epona's Song" from Malon. When he is an adult he can pay Ingo to ride either Epona or an unnamed horse. Any horse besides Epona will not be capable of defeating Ingo. Link must play Epona's Song to coax Epona into letting him ride her.

Ingo will offer to race Link when he rides Epona a second time. Should Link beat him twice, Ingo will grudgingly let Link keep Epona, but will lock the gates of Lon Lon Ranch to prevent Link and Epona from leaving. Link must then ride Epona and leap over the outer barriers of the ranch to keep her. Afterwards, Ingo will apologise and Malon will let Link ride Epona in an obstacle course. There is also a horse presumably owned by a Gerudo at the Horseback Archery Range.

Epona again serves as Link's faithful mount, though she is a young filly as opposed to the adult horse seen in other games. The Gorman Brothers, owners of a horse training center, are also seen riding two grey speckled horses, at one point while wearing Garo's Masks. They also run a horse racing mini-game featuring obstacles such as mud, fences and trees. Link can race the Gorman Brothers on Epona, and will win a Garo's Mask of his own if he can beat them. Also, if Link helps Romani repel Them on the First Night, Cremia can be seen riding in a carriage pulled by an unnamed beige horse or mule on the Second Day.

Link appears riding an unnamed horse that looks similar to Epona in the opening sequence of both games.

The Hero of Time can be seen riding Epona in the game's Prologue. It is unknown if any horses survived the Great Flood, however since none are encountered in The Wind Waker or Spirit Tracks it is possible that the species may have gone extinct.

Link can ride Epona in the Near the Fields stage by throwing a Carrot on the ground. Also, the Bucking Bronco mini-game found in Tingle's Tower is a multiplayer horse race.

Malon uses Epona to pull a cart carrying Lon Lon Milk into town. If Link talks to her while in Minish form, she will plead Link to buy Lon Lon Milk so that she has less to haul back.

Epona is once again Link's horse. In this game, another name can be selected for Epona, even though Epona remains the default name. She is seen hauling wood in the opening scenes. She appears to be of heavier stock than horses seen in earlier games. Another horse is seen pulling the cart containing the ill Prince Ralis, Ilia, and Telma on the way to Kakariko Village. Horse riding in Twilight Princess features several new mechanics, including the ability to attack with a sword whilst mounted. Epona can also damage enemies by rearing back and stomping on unfortunate enemies.

Ganondorf's steed also returns in Twilight Princess towards the end of the game, and is used by Ganondorf to battle Link. During the battle, Ganondorf summons Phantom Riders to aid him.

"These can most often be found on plains. Their usefulness as transportation has made them valuable since ancient times. That said, wild horses do tend to get spooked and run off when approached, so if you're looking to snag one, it's best to sneak up on it."
— In-game description 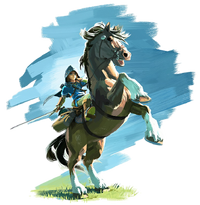 Wild horses of varying stats and colors can be encountered in the overworld, but most commonly in the Faron Grasslands and Hyrule Field. Link can tame them, then register and name it at a Stable. When riding horses, they can follow a set course and will automatically avoid running into obstacles allowing Link to concentrate on more actions while riding giving him more freedom on horseback, such as vaulting off the horse to aim his bow in slow motion and fire arrows more accurately. These Horses can be killed by enemies or player caused destruction. However any registered horses can be revived by the Horse Fairy Malanya at the Malanya Spring in the Lake Tower region near the Highland Stable. In order to make Malanya appear, Link must pay 1,000 Rupees and she will offer to revive any registered horses that have perished. Link can register up to five horses at Stables and can choose to release a horse back into the wild if he obtains a better steed. He can also board horses at stables when he is not using them.

Each horse has different stats and temperaments. Generally Horses that are one color have better states but are more difficult to tame while Horses with spots or different colors are easier to tame but generally have lower stats. Temperament determines how easy a horse is to tame and bond with. Some special horses appear during certain side quests which Link can register after the quest is completed.

To tame a horse, Link must approach it silently from behind (wearing clothing and using items that increase Stealth make this task much easier) and mount them. After mounting them, Link must soothe them while avoiding being thrown off which occurs when his stamina gauge empties (Link can uses stamina restoring or boosting items to make this process easier). Once a horse has been properly soothed Link can ride it though depending on its temperament the horse may disobey Link's commands. Link can make it more obedient by bonding with it. The Soothe command can be used to train a more temperamental horses to follow Link's commands, by soothing it when it successfully follows commands properly (effectively rewarding good behavior). When soothed successfully, a cloud of pink partials will appear over the horses head. Link can also feed it certain foods like Apples and carrots by holding those items in his hands near the horse's head, which increases Link's bond with it (pink partials appear over its head in this is done as well). Once Link's bond with it reaches 100, it will follow Link's commands unconditionally and it will be fully tamed.

Along with Horses, Link can also tame and ride other large animals like deer and bears, however unlike horses these cannot be registered at stables.

Epona can also be attained exclusively by using the amiibo Rune and scanning the Link amiibo from the Super Smash Bros. or the The Legend of Zelda 30th Anniversary amiibo series. Upon registering, her name will default to Epona, and no other name can be entered. In addition, any stable hand will refuse to change her Mane, Bridle, or Saddle from the unique set she receives upon registry. She only appears the first time the amiibo is used and only once per save file so it is best to wait and use said amiibo when Link has access to a Stable so he can register her. Epona has some of the best stats and a gentle temperament.

Unlike past games, Epona is not invulnerable and can be killed, though she can be revived by Malanya if she is registered.

In Breath of the Wild, there is an undead variant called a Stalhorse that appear ridden by a Stalkoblins at night. Link can dismount the Stalkoblin and ride Stalhorses, but they cannot be registered at a stable. Bokoblins can be seen riding wild horses as well.

Link owns a horse named Catherine. Zelda has her own horse.

Many horses appear in the comics, including Princess Zelda's horse, Storm.

Retrieved from "https://zelda.fandom.com/wiki/Horse?oldid=506078"
Community content is available under CC-BY-SA unless otherwise noted.