Zelda Wiki
Register
Don't have an account?
Sign In
Advertisement
in: Villages, Locations, Locations in Oracle of Seasons
English 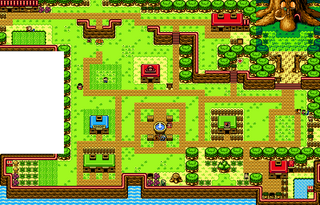 Holodrum, Horon Village Shop, Clock Shop, Vasu Jewelers
Horon Village is a location in Oracle of Seasons.[1] It appears along the southern coast of Holodrum, and is the largest of the two human settlements in the land (the other being Sunken City). The village itself is home to several important locations for Link: Vasu Jewelers, the Maku Tree, and one of the two stores in Holodrum, Horon Village Shop. The disharmony of the seasons causes distress among the inhabitants of the village.[2][3] Ruul is the village mayor.[4]

Link first visits Horon Village through the north entrance in North Horon shortly after arriving in Holodrum and witnessing the capture of Din by the hands of General Onox. Impa sends Link to the village to get help from the Maku Tree, the guardian spirit of the land.[5] However, Link must "display his courage" to open the gate to the Maku Tree. This is done by obtaining the Wooden Sword from the Hero's Cave on the Western Coast just west of the village.[6] Near the northwestern exit that leads to the coast there is a duplex; the Know-It-All Birds are found in the western wing of the house while the eastern wing remains closed unless the game is being played on a Game Boy Advance, in which case it becomes the Advance Shop. Next to the duplex an Old Woman can be seen working on her crops year-round, complaining how the disarray of the seasons will affect the year's harvest.[7] Just east of this is the village's northern entrance, where a child can be found playing with a Blast Bloom in spring.[8]

In the heart of the village is a water fountain, where a painter spends his time. Unlike some of the other villagers, he is not distressed by the changing seasons and claims enjoy all the scenery it causes.[9] In a Linked Game, a girl with a secret for Link appears to the right of the fountain.[10] To the west, north, and east of the fountain are the village's three shops: Horon Village Shop, the Clock Shop, and Vasu Jewelers, respectively. The Horon Village Shop is the only place in Holodrum aside from Syrup's Potion Shop where Link can buy goods. In the Trading Quest, Link must bring the Wooden Bird to Tick Tock in the Clock Shop. Vasu Jewelers, run by Vasu, handles Magic Ring appraisal and storage.

The mayor's residence is found east of the village's north entrance. Outside Mayor Ruul's home there is a patch of Soil where a Gasha Seed can be planted. The northeastern area of the village is inhabited by the Maku Tree, blocked off by the Maku Tree Gate. Just south of the Maku Tree is the village's eastern entrance that leads to the Eastern Suburbs. Here, Sokra spends his time sleeping or playing a tune on his guitar. A boy can also be seen playing ball with his dog Flash. The eastern entrance is barred by saplings; once Link has obtained the Seed Satchel from Gnarled Root Dungeon, he can burn them using Ember Seeds.[11] Link can acquire some from the Ember Tree south of Vasu Jewelers. North of Vasu's shop, a staircase blocked by another sapling leads to a Piece of Heart.[12]

South of the water fountain is the village's only Tree Stump. Next to it there is a staircase leading to a cave beneath the village. This cave contains a Portal to Subrosia leading to the House of Pirates.[13] However, the portal is out of reach. To use it from both ends, Link must first travel through the portal from Subrosia to flip a Switch in the cave, creating a bridge.[13] West of this area (south of the Horon Village Shop), is Bipin and Blossom's home. Throughout his adventure, Link can come back to their house and help raise their son, though this is an optional sidequest. West of Bipin and Blossom's home there is a small bluff jutting out into the Western Coast which comprises the southwestern tip of the village. In autumn, Link can pick the Rock Mushrooms in the area, allowing him to reach a Treasure Chest containing 20 Rupees.

Finally, Dr. Left lives in the southeastern corner of the village. He gives Link the first item of the Trading Quest, the Cuccodex, thus engaging the sidequest. Just outside his home there are three saplings. The one in the middle, when burned away with an Ember Seed, reveals an secret cave. The Old Man living inside gives Link 100 Rupees to keep it a secret.[14] In Dr. Left's backyard (accessed by blowing a hole in the wall in the house with a Bomb) there is another 20-Rupee Treasure Chest surrounded by a pond. The chest can be accessed in winter when the pond freezes over.