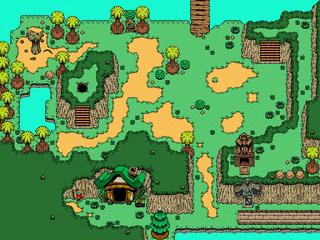 The Hometown Prairie is a location in Freshly-Picked Tingle's Rosy Rupeeland.[1] It is located on the First Continent.

After Tingle leaves Port Town, he runs into Aba, who warns him that he is going to die.[2] She immediately retracts this as a joke, and offers to teach Tingle how to fight in her Battle Class.[3]

Fish Rock is a statue of a Fish located in the north-western part of Hometown Prairie.[4] When Chiko loses her Fairy Doll, she tells Tingle that it was eaten by a Fish.[5] To get the Fairy Doll back, Tingle must interact with Fish Rock, which will cause it to spit out the Fairy Doll. Once Tingle delivers it back to Chiko, the young girl will show him the entrance to the Hero's Shrine.[6]

Fish Rock is one of the locations that Tingle can mark on his Map for the Map-Seller. She will reward Tingle with 50 Rupees for doing so.

The Husband's Grave is the final resting place of the Master Mapper, the late spouse of the Map-Seller.[8] It is the first mapping landmark that Tingle can draw. It is here that Tingle receives the Map of the Hometown Prairie, after he accepts the Map-Seller's request for help.[9][10]

Port Town is home to many characters, such as Chiko, Chiko's Mum, the Armourer, the Jeweler and the Map-Seller. Before Tingle can talk to its denizens, he must pay all of them a small fee.[how many?]

The Rupee Tower is a structure that is designed to take Tingle to Rupeeland, as promised by Uncle Rupee. It rises from the Western Pool after Tingle throws a certain amount of Rupees into it.[how many?] Tingle gains the ability to travel to new locations as the Rupee Tower continues to rise whenever Tingle throws enough Rupees into it.[how many?] The top of the Rupee Tower sports a diving board, which Tingle must use in conjunction with his Balloon to descend to these new areas.

Tingle is called to the Western Pool by Uncle Rupee, who promises him a more exciting life. There, Uncle Rupee tells Tingle of Rupeeland and that to enter it, he must throw Rupees into it.[11]

Tingle begins his journey inside his home, where he is contacted by Uncle Rupee, who is offering middle-aged adventurers entrance into Rupeeland, instructing him to go to the Western Pool.[11] Tingle can only save by using the terminal inside his home.[12]

50 Rupees and an Empty Jar can be found in the right part of his home.

Tingle can also create Recipes from Ingredients that he finds on his journey by mixing the Ingredients in his Jar. The Recipe for the Tingle Fireworks is obtained by talking to Pinkle at the terminal.[13]