Zelda Wiki
Register
Don't have an account?
Sign In
Advertisement
in: Countries, Locations, Locations in Oracle of Seasons
English 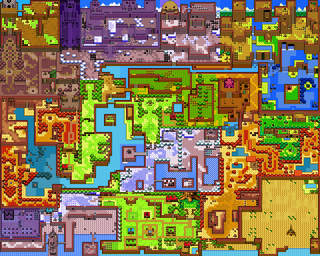 Holodrum is the land in which the events of Oracle of Seasons take place.[1] The land's vibrant landscape is unique that it is affected by the four seasons, which begin change erratically when General Onox imprisons the Din and causes the Temple of Seasons to sink into underworld of Subrosia.[2] Onox's ultimate goal is to create chaos in Holodrum in order to light the Flame of Destruction.[3]

Holodrum's geography, like its sister land Labrynna, is diverse. The north is dominated by mountains ranging from east to west. In the west lies the Tarm Ruins, where stands the tall tower of the Ancient Ruins, the highest point in all the land. This is followed by the dark Northern Peak, where Onox has built his stronghold. East of the Northern Peak are the Temple Remains, where the Temple of Seasons once stood. This is overlapped by Goron Mountain, home of the Gorons, and followed by Mt. Cucco on the eastern edge of Holodrum. Mt. Cucco is the main source of water in Holodrum; water flows from its peaks creating a river that stretches across the map, flowing into the southwestern Spool Swamp. Central Holodrum consists mostly of plains and forest, namely Holodrum Plain, Natzu Prairie, North Horon and the Woods of Winter to the east. The main human settlement, Horon Village, is located in the south central part of Holodrum. To the east of the village lies the sand-swept Samasa Desert, and to the west, the Western Coast and the Graveyard. Beyond these are the seas that comprise Holodrum's southern border. The Piratians navigate these waters and use them to travel between Holodrum and Labrynna.[4][5]

The changing seasons have an active effect on Holodrum's environment. In winter, the leaves fall, lakes freeze and can be walked on; snowdrifts block certain paths while providing access to higher ledges.[6] Flowers that were rock hard buds bloom in spring, when Blast Blooms can be used.[7] In summer climbable vines grow on rock walls and in autumn Rock Mushrooms can be picked.[8][9] Link will need to gather the power of the four seasons for the Rod of Seasons to fully navigate the land. Due to the disharmony caused by Onox, the four seasons occur simultaneously. In one region, there may be mounds of snow, while a short distance away the leaves are just starting to fall or the flowers are in full bloom. For the duration of the game, each region has a "default" season. This default season will automatically be present every time Link enters the region from another, and will remain until Link changes it or exits the area. Once Onox is defeated and stability returns to Holodrum, the entire land reverts to spring, the actual season.

See Locations in Oracle of Seasons

Beneath the land of Holodrum is a subterranean world named Subrosia where the Subrosians live unbeknownst to the people above and even the guardian spirit Maku Tree.[10] Geographically, Subrosia is somewhat similar to Holodrum, with mountain ranges to the north and a southern coastline. The two worlds are connected by seven Portals scattered across the land.[11] Subrosia becomes the new location of the Temple of Seasons, and so Link will have to travel to the underground world several times to obtain the Rod of Seasons and restore its power.

Holodrum is relatively uninhabited and has no unified form of governance. The majority of its human population resides in Horon Village under the protection of the Maku Tree.[12] The village is led by Mayor Ruul. Another human settlement (possibly a colony of the previous) exists nestled into the mountains and lies directly beneath Mt. Cucco. Sunken City, true to its name, is flooded in Oracle of Seasons by great snow-melts from Mt. Cucco due to the disharmony of the seasons.[13]

Aside from humans, the only sentient denizens of Holodrum—aside from the moblins who live in Great Moblin's Keep and the occasional Deku Scrub—are the Gorons, who live within the catacombs of Goron Mountain (with the exception of Biggoron who cannot fit inside and so perches atop the mountain).[14] The settlement is relatively small in comparison to other Goron dwellings such as Goron City in Hyrule or Goron Village in Termina. In fact, these Gorons are a colony, descended from Gorons of the motherland, Rolling Ridge, in Labrynna. The colonization was led by the Goron Elder.[15]

There are no Zoras in Holodrum. In a Linked Game, a Labrynnian Zora is sent by King Zora to search for a new domain for their race. He discovers there is no suitable location for the Zoras in Holodrum given the lack of large bodies of water.[16]

See Dungeons in Oracle of Seasons