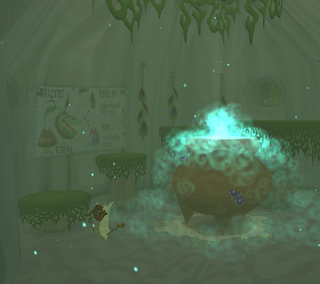 Hollo's Forest Potion Shop is a location in The Wind Waker.[1] It is located inside a cave within the main area of Forest Haven. Hollo heals the Koroks using the ingredients found in the forest[2] and runs the shop; he is one of two Koroks to remain in Forest Haven after the Korok Ceremony, the other being Makar. If Link gives him four Boko Baba Seeds, then Hollo will concoct a Blue Potion from the spoils.[3]