Zelda Wiki
Register
Don't have an account?
Sign In
Advertisement
in: Enemies, Sand-Related Enemies, Enemies in A Link to the Past,
and 2 more 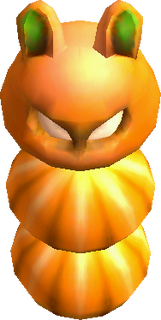 Sword
Fire Rod
Sand Rod
Hokkubokku are recurring Enemies in The Legend of Zelda series.[1] They are segmented, cactus-like creatures that move by bouncing around rooms in diagonal directions. When they are hit with Link's Sword, a segment will break off and bounce around the room. They are usually desert-dwelling enemies.

Hokkubokku appear in Turtle Rock in A Link to the Past. Whenever Link attacks one, a segment will break off and hop about, before eventually vanishing. These segments can hurt Link, and along with the main body, can cause a large amount of damage. However, if Link is able to destroy a bouncing segment before it vanishes, it will often leave behind a Fairy or a big Magical Decanter. As Hokkubokku lose their segments, they will move faster and bouncer further. The final head segment will not rebound around the room, and will take a couple of hits to finish off completely. Using the Fire Rod allows Link to destroy them completely in one hit.

In A Link Between Worlds, a Hokkubokku appears in the Desert Palace. It initially appears under the sand, and dives in when Link gets too close, only to reappear somewhere else. The Sand Rod is needed to make it erupt from the ground, from where it is fought in the same manner as in A Link to the Past.

In Tri Force Heroes, Hokkubokku have only two body segments as opposed to the three seen in earlier games, and they are fought in the last Stage of the Infinity Dunes Level. One is initially encountered, and three more appear after it has been defeated. Like its previous appearance, the segments will bounce off if they are attacked. The Links can reach and attack its head without striking the segments by forming a Totem, or alternately by using the Water Rod to create a pillar of water. Once reduced to only a head, Hokkubokku will begin to flee the Links and try to burrow back into the sand. If they successfully escape, they will reemerge from the sand with newly-grown body segments.

A single Hokkubokku is also encountered in the Desert Zone of the Den of Trials.