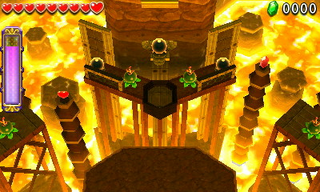 Hinox Mine is a Level in Tri Force Heroes.[name reference needed] It is the second Level in the Volcano area.

The Level is a large volcanic cavern, which serves as a mine. It consists of several railways and mine carts that are utilized in the Level, primarily for transportation over lakes of magma.

In Stage 1, the Links begin at a small area with a pair of pillars growing Bomb Flowers, and a large block barricading the way. A pair of Boomerangs and a Bow are immediately provided for their use. To destroy the block, the Links must throw the Boomerangs at the Bomb Flowers, which will bring it to their hands. The Bombs can then be thrown at the block, which requires two blasts to destroy. Removing the block allows one of the Links to shoot an Arrow at the Switch across, which rises a fleet of stairs to the next area above. Here, the Links must work in tandem to activate a set of three timed Switches across a gap. One Link must grab one of the Bomb Flowers from the sides, and throw it between the two Bomb Flowers that sit next to the switches. This will make the Bombs explode and activate two Switches. The Links must then quickly form a Totem so the top Link can fire an Arrow at the top Switch before the timer runs out. Activating all three Switches at once creates a moving platform that leads to the Triforce Gateway.

In Stage 2, the Links appear on a platform above a set of rails and a mine cart. The cart will continuously move in a circle around the area, passing by Bomb Flowers and a cracked block. The Boomerang can grab the Bombs, as well as the Rupees sitting on the ledge. Demolishing the block reveals a Switch above and a purple Rupee. This Rupee can also be grabbed with the Boomerang, while the Links must form a Totem of three to hit the Switch with an Arrow. A pair of Bomb Flowers next to the Switch will also activate it if hit. Doing this turns the rails so the mine cart will move north to a Triforce Gateway.

Stage 3 features another mine cart and a more complex railway. The Links ride the cart around another circle, and pass by a lever switch. Hitting this turns the rail so the mine cart can move to the next set of rails. This next area contains a group of Bomb Flowers and three Switches. The Switches all have a line of Bomb Flowers leading up to them, while two also sit close to a fire stack each. The Links must activate these Switches by blowing up the Bomb Flowers, creating a chain reaction that will hit the Switches. One Switch simply requires one Link to shoot an Arrow at the line of Bombs, while the other two require that the Links throw Bombs into the fire stacks. The Links can grab Bomb Flowers from the ledges using the Boomerang to achieve this. Alternately, the other two Switches can also be hit with an Arrow at just the right angle and timing. Hitting all three turns the rails, leading to the Triforce Gateway.

Stage 4 is where the Links fight two of the Hinox Bros in a larger mine cart.

Hinox Mine includes the following Drablands Challenges: "Clear within the time limit!", "Pop all balloons!", and "Don't pop any balloons!".