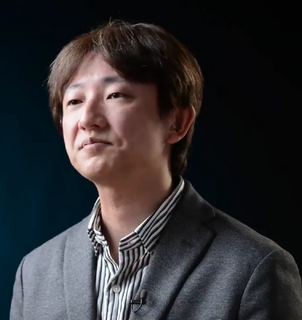 Fujibayashi in a Breath of the Wild interview.

Prior to pursuing a career in video games, Hidemaro Fujibayashi was exposed to the Zelda series as a child, having used his New Year's allowance to purchase the NES Disk System to play the first Legend of Zelda game.[1]

After graduating from university, Fujibayashi was considering a creative career in designing and creating layouts for haunted houses at amusement parks, and planning attractions for theme parks. Subsequently, a job opening at an unnamed video game company (not Capcom) inspired him to try joining the games industry.[2] Fujibayashi joined Capcom in 1995 and worked as a planner on the interactive movie Gakkō no Kowai Uwasa: Hanako-san ga Kita!! Following this, he served as planner and director on Ide Yosuke Meijin no Jissen Mahjong, followed by Magical Tetris Challenge.

In 1997, Yoshiki Okamoto, a veteran designer at Capcom, established a new studio dedicated to creating games for multiple platforms. The studio, named Flagship, was set up as a subsidiary under Capcom and was jointly funded by Capcom, Sega, and Nintendo, with the understanding that it would focus development on the Sega Saturn and Nintendo 64 in collaboration with the three companies.[3] In 1999, Okamoto approached Nintendo about the possibility of the studio contributing to first-party games, including a new Legend of Zelda title. Nintendo's Shigeru Miyamoto agreed to his proposal, and the staff at Flagship that were free began drafting a story for a remake of the Nintendo Entertainment System's The Legend of Zelda on the Game Boy Color. Okamoto would supervise the project, with the intent being to introduce a new generation of players to the appeal of that first Zelda game.[4][5]

Eventually, this project grew in scope to involve a trilogy of games that could be completed in any order. Fujibayashi, who was still serving as a designer at Capcom, was brought on board and assigned to serve as Okamoto's assistant. Early on, Fujibayashi would compile the ideas Okamoto and his team had, and eventually used them to write the original proposal Flagship had presented to Nintendo.[6] This proposal included a unique idea of his own—the ability to link all three games in the trilogy via a Game Boy link cable, allowing things the player had missed in one game to appear in the next.[7] Eventually, Fujibayashi began taking an active part in development himself and was promoted to director by Okamoto. He then began approaching Capcom artists and programmers to put a full-fledged development team together, and the team went on to release Oracle of Ages and Oracle of Seasons.[8][9]

Following the Oracle games, Fujibayashi served as the director for Four Swords, a multiplayer Zelda game included with the Game Boy Advance remake of The Legend of Zelda: A Link to the Past. He then directed The Minish Cap, a game for which he settled upon two broad goals: to do something that nobody had done before, and to make a game that was representative of Capcom's talent for 2D artwork.[10] Sometime after the game's release, Fujibayashi would part ways with Capcom to join Nintendo and become a full-time member of the Zelda team.

Partway through the development of The Legend of Zelda: Phantom Hourglass, Fujibayashi was requested to join the project as a sub-director.[11] At this point, the rest of the team was still working on the game's controls, experimenting with using the stylus to control Link's movement and writing on the map. After joining, Fujibayashi assisted with the process of helping define the game's scope and wrote a large portion of its dialogue.[12][13][14]

Following the completion of Phantom Hourglass, Fujibayashi volunteered to direct the next Zelda game for the Wii. Upon presenting a planning document to Nintendo's management, he was assigned to be the director of The Legend of Zelda: Skyward Sword, taking charge of both gameplay and the game's script.[15] Fujibayashi would later state that, although he initially felt a great deal of pressure working on his first home console Zelda game, his fundamental approach to directing a portable or console Zelda title was the same.[16]

During the development of Skyward Sword, Fujibayashi thought up the idea of having Link skydive from a high altitude, as well as being able to dash over obstacles, rather than being stopped by them, so it wouldn't impede the player's movement.[17][18] Additionally, he also asked for the player to be able to select items using the Wii MotionPlus without having to look at the screen, which led to the creation of the game's new motion-controlled radial menu.[19]

Fujibayashi would eventually go on to direct The Legend of Zelda: Breath of the Wild, playing a key role in helping the series break away from its conventions and find a new identity for itself.

As the director of the Oracle games, Fujibayashi played a key role in helping establish a four-year relationship between Nintendo and Capcom, whereby the latter would co-develop Zelda games under the supervision of Nintendo. The games developed under this arrangement include: Oracle of Seasons, Oracle of Ages, A Link to the Past & Four Swords, Four Swords Adventures, and The Minish Cap.

After joining Nintendo, Fujibayashi helped introduce a number of new elements to the Zelda series, including skydiving, the stamina meter, and Link's increased mobility, as the director of Skyward Sword. Fujibayashi would eventually go on to direct The Legend of Zelda: Breath of the Wild, helping the series establish a new identity for itself, with the game selling over 27 million units worldwide.