"A sword wields no strength unless the hand that holds it has courage. Remember those words..."
— Hero's Shade

The Hero's Shade is a character from The Legend of Zelda: Twilight Princess. Once a famed swordsman of Hyrule, he is, according to Hyrule Historia, the Hero of Time from Ocarina of Time and Majora's Mask that died lamenting that he was never remembered as a hero, as well as not passing down his skills to the next generation.

Partially to ease his regrets, the Hero's Shade teaches Link his hidden skills that can only be passed down through those carrying "the hero's bloodline", seeing potential in his descendant.

He manifests himself as a spectral golden wolf in the world of the living, and as an armored, skeletal warrior in the strange otherworld of the Ghostly Ether. The Hero's Shade's right eye glows bright red, while his left eye is missing; as a wolf, it is closed and appears scarred, while as a warrior, it is unlit and transparent. He is also accompanied by rasped breathing. Other design concepts and illustrations depict different versions of Hero's Shade, including a Samurai version, a twilight version and even a female version.

It is shown in Twilight Princess that the Hero of Time as the Hero's Shade becomes much more mature sometime after his adventures in Termina. He also seems to have developed a rather sombre attitude and speaks archaically (in a manner similar to his adoptive father, the Great Deku Tree). He is also hinted to be somewhat impatient, growing slightly frustrated whenever Link performs poorly.

When Link first encounters his ancestor however, the ghostly hero offers to teach Link his skills to save Hyrule showing that he is still good in nature. He also seems to care for Link, and called him "my child" before moving on, showing that he fully accepts Link as his descendant.

Despite having been mostly forgotten (save for a few legends of his exploits known to a select few), the Hero's Shade remains loyal to the Kingdom of Hyrule and the Royal Family of Hyrule and continues to assist the kingdom even in death by training Link into becoming a powerful swordsman.

The Hero's Shade is a powerful being, impervious to attacks, although he can be knocked down during training sessions, presumably due to his status as a spectral figure, with even the Master Sword being incapable of damaging him (which makes sense given he has a good spirit and has even once wielded the legendary blade himself as it's chosen hero). His skills as a swordsman are noteworthy, possessing great knowledge of sword techniques, which he presumably accumulated over the course of his lifetime which is greater than a normal persons' due to having travelled thru time and having experienced adulthood twice. The Hero's Shade not only has the ability to replicate himself, which he uses during training sessions involving multiple enemies, but can also launch large fireballs from the end of his sword (in a manner reminiscent to the iconic Sword Beam). The Hero's Shade also possesses other abilities such as transporting Link to the Ghostly Ether.

Like his descendant, the Hero's Shade can also transform into his own version of the Wolf form, which takes the form of an otherworldly golden wolf. In his wolf form, the Hero's Shade can howl to perform duets with Wolf Link after he howls the songs he learns from Howling Stones, many of which are songs used by the Hero of Time during his lifetime. Unlike Link, the Hero's Shade seems to be able to transform between his spectral skeletal form and Golden Wolf form at will, though it is possible he can only take on his spectral skeletal form within the Ghostly Ether. However he is able to use his Golden Wolf form in both Hyrule and the Ghostly Ether.

When Link, a young man from Ordon Village, learns of his destiny to overcome the evils of Zant, usurper to the throne of the Twilight Realm, the Hero's Shade sees the potential for a master swordsman within him. In his golden wolf form, he approaches Link on his way to the Forest Temple, and transports the youth to the Ghostly Ether.

In the Ghostly Ether, the Hero's Shade offers Link his knowledge of the sword. After teaching him the first skill, the Ending Blow, he tells Link that in order to meet him again, he must approach a Howling Stone in wolf form and howl the notes that the stone echoes. When Link successfully does so, the Hero's Shade will appear somewhere in the land of Hyrule as a golden wolf. Link can then approach the wolf in his Hylian form to enter the Ghostly Ether and learn a new skill. However, before he is allowed to learn a new one, Link must prove his mastery of the previously learned skill by utilizing it against the Hero's Shade, who seems to grow frustrated with Link when he forgets or has a hard time mastering a skill.

When Link has learned six of the Hidden Skills, the Hero's Shade makes his final appearance in front of Hyrule Castle and teaches Link the Great Spin Attack. His regrets eased, the Hero's Shade then passes on to the world of spirits. Before moving on, he also states his confidence in his descendant and encourages him. Interestingly, even though Link seemingly blacks out during his sessions with the Hero's Shade, Midna never remarks on it, nor does she seem to notice anything amiss, this implies that the training sessions are instantaneous or that she is unable to perceive the Golden Wolf. It is also interesting to note that Link turns back to Hylian form during the training sessions, seemingly without using the Master Sword, though presumably the Hero's Shade may use his power to restore Link's original form.

Oddly enough, despite supposedly not being remembered as a hero, the Light Spirits, Dangoro and Ashei mention him at one point or another and refer to him as "the legendary hero". Since the Light Spirits seems to have a vast knowledge of Hyrule though, it is understandable why they would be aware of the Hero of Time's exploits. The reason why the Gorons also know of the Hero of Time can be explained as him becoming more intimate with them as a brother-in-arms, hinted by the fact that he chose to entrust his Hero's Bow to them. Ashei may have heard of him from her father, a retired Knights of Hyrule which may have had knowledge of his exploits.

In Ocarina of Time, it is stated that anyone other than a Kokiri who enters the Lost Woods will be cursed, with children becoming Skull Kids and adults becoming Stalfos. The Hero's Shade resembles a Stalfos, including his glowing red eye, hinting that he may have spent his final days wandering the Lost Woods, where he lived as a child, before succumbing to its curse.

Model Render of the Hero's Shade from Twilight Princess

Render of the Hero's Shade from Twilight Princess 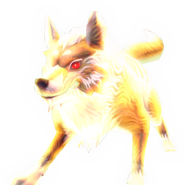 Render of the Golden Wolf from Twilight Princess

The Hero's Shade training Link in Twilight Princess
Add a photo to this gallery
Retrieved from "https://zelda.fandom.com/wiki/Hero%27s_Shade?oldid=544115"
Community content is available under CC-BY-SA unless otherwise noted.