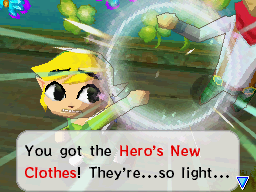 Phantom Hourglass
Part of the Trading Quest
The Hero's New Clothes are recurring clothing in The Legend of Zelda series.[1]

During the Second Quest of The Wind Waker, Link receives the Hero's New Clothes from his Grandma instead of the Hero's Clothes. The clothes are invisible, meaning Link will be seen wearing his starting outfit for the rest of his adventure.[2]

Although the Hero's New Clothes are invisible, as it is said they can only be seen by honest people,[2] some characters comment about Link's new outfit. Such is the case during the conversation with the Great Deku Tree. As the Second Quest features all Hylian Language translated, the Great Deku Tree refers to Link's clothing as the clothes of the legendary hero.[3]

The Hero's New Clothes appear in Phantom Hourglass as part of the game's Trading Sequence. They can be obtained from the Man of Smiles after visiting him for the first time. The Clothes must be traded for the Kaleidoscope from Nyeve. Although the Clothes are invisible, Nyeve senses them in Link's possession,[4] stating that he has been long searching for such an item.[5]