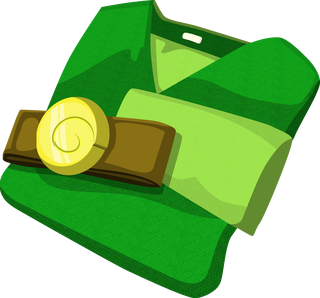 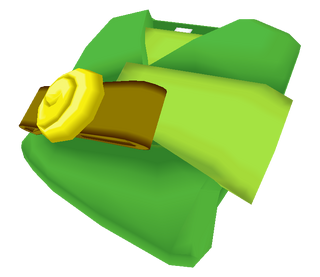 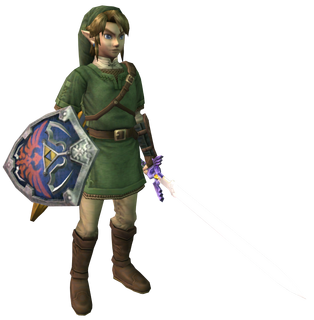 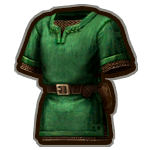 Halves damage taken in human form (Twilight Princess)
The Hero's Clothes are a recurring item in The Legend of Zelda series.[1]

Link receives this set of clothes very early on in his adventure in The Wind Waker. It was customary for the young boys of Outset Island to don a green tunic in honor of the Hero of Time upon reaching a certain age.[2] They were especially made for Link by his Grandmother for his birthday and were designed and suited to look like the Hero of Time.[3] As Link wears these, some characters will come to realize a feeling of nostalgia and mistake him for the Hero of Time,[4] while others will think the outfit is old-fashioned.[5]

In Twilight Princess, once Link returns the light to the Faron Province after collecting the Ordon Shield and Ordon Sword for Midna, he is given the Hero's Clothes by Faron.[6] Faron notes that the Legendary Hero once wore these clothes, a treasure kept by the Spirits of Light, and that it was only fitting that Link don the clothes as well, as his successor.[6] The Hero's Clothes also possess some visual differences from past incarnations; they are similar to what is worn in Ocarina of Time and Majora's Mask, but with some add-ons. Underneath the green is a chainmail shirt, and the garb also possesses two small pouches attached to the belt. The fabric of the tunic and hat has stitches and seams, unlike the seamless formation of all previous tunics, and the boots and undergarments of the tunic have things such as buckles, small holes, and other indications of wear-and-tear and hurried craftwork.