It should be rewritten in a more encyclopedic manner to conform with the standards of Zelda Wiki.

Helping Romani and Cremia is a quest in the Bombers' Notebook in Majora's Mask.

The quest has two sequential parts. On the Night of the First Day, Link helps Romani defend the Cows of Romani Ranch from Ghosts. If he succeeds, he can then help Cremia on the Night of the Second Day by protecting her Milk delivery from the Gorman Brothers.

For helping Romani, Link receives a Milk Bottle. For helping Cremia, he gets Romani's Mask. At the beginning of the quest, Link re-unites with Epona, whom he needs to reach the Great Bay Coast.

Once Link is able to clear the boulder on the First Day with a Powder Keg, the young hero can meet Romani, who calls him "Grasshopper" because of his green tunic.[1] She tells him that Ghosts are coming to kidnap their Cows, and recruits him as an assistant, for her older sister, Cremia, does not believe her story about the Ghosts.[2] Romani then puts Link in a target-practice challenge, where he must shoot arrows at 10 Ghost balloons within a 2-minute limit. Romani also allows Link to use Epona during the challenge. After Link completes the challenge, Romani will teach "Epona's Song" to him; this song can be used to summon Epona. Romani will then instruct the young hero to be at the barn by 2 AM to fight off the real Ghosts.[3]

Training with Romani on the First Day is optional for the purposes of helping Romani fend off the Ghosts. Romani acknowledges Link's help even if it is the first time they meet in the three-day cycle. In fact, she acts just the same as if they had met before.

Night of the First Day

At 2:00 AM, Romani leaves the house and enters the barn. The Ghosts arrive at 2:30 AM. They appear on the field and attempt to "beam up" the Romani Ranch Cows. Link must prevent the Ghosts from getting near the barn until the sun rises at 5:15 AM, at which time they disappear. At this point, Link can ride Epona or use the Bunny Hood to get around the Ranch quickly. He can also use the "Inverted Song of Time" to slow the Ghosts down. Romani's dog will bark in the direction of the nearest ghost.

Another way of doing this is standing a small distance away from the crate (after finding a good spot, it is best to destroy the crate). Then, rather than using Epona, Link will have a good shot at all of the Ghosts before they reach the barn. This is useful for avoiding any issues with accuracy with the Bow while riding Epona, but once Link is out of Arrows, it can be difficult to get more.

Romani will thank Link by giving him a Bottle with Milk, and then head to bed, thanking him for his help and calling Link a "little hero."[4] This fulfills Romani's entry in the Bombers' Notebook. 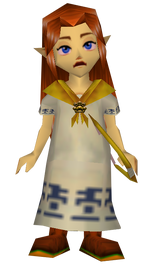 If Link fails to save the Cows from the Ghosts during the First Day, Romani will be wandering around the Ranch in a disoriented state, unable to remember anything.[5] Cremia stands in their empty barn, bemoaning their loss and wishing she had believed her sister so she could have helped her save the Cows.[6]

If Link did successfully help Romani, the young hero can find Romani and Cremia in the barn having a discussion about taking Milk to Clock Town. Even though Romani insists in going to Clock Town to deliver Milk, Cremia persists that she has to take care of the Cows.[7][8]

Night of the Second Day

At 6:00 PM, Link must return to the Ranch, where Cremia will employ for his help and company. If Link accepts, the young hero will get in the back of the wagon and ride to Milk Road, where their path is impeded by road blocks. Cremia will warn Link to ready his Bow and take the wagon through Gorman Track,[9] where they are attacked by masked bandits. In order to safely make it through Gorman Track, Link must defends the cart and the Milk against the bandits until they reach Termina Field. After this event, Cremia thanks Link and gives him Romani's Mask, acknowledging him as an adult.[10] If Link completes the task again, she will give Link either a Gold Rupee or an affectionate hug.[11] This fulfills Cremia's entry in the Bombers' Notebook.

An easy way to do this mission is to wear the Troupe Leader's Mask. If this is worn, the bandits will not attack, and will merely follow the caravan. Even if Link attacks, they will not respond; however, this is only possible after Link completes this sidequest and receives Romani's Mask, as the Troupe Leader's Mask is only obtained in Milk Bar during the periods of time that require Link to wear Romani's Mask to be in there.

If Link fails to save the Cows from the Ghosts during the First Day, Romani will be sitting outside the barn, traumatized and catatonic. Cremia will remain in the barn and lament the loss of their Cows, just as she had done the day before. However, if both events have been completed, Romani will offer Link the opportunity to take part in target practice, and Cremia will express her fears about the Moon.[12]

Night of the Final Day

After nightfall, both Cremia and Romani will be in the barn, milking a Cow like on the Second Day. Cremia tells Romani that she considers her to be an adult, and is allowing her to drink Chateau Romani; it is also likely that Cremia is going to make her a Mask.[13] This scene can be difficult to witness if the Kafei-Anju quest is underway, as Sakon will already be making his way to his Hideout, and borders on impossible without the "Inverted Song of Time" or the "Song of Soaring". If that sidequest is not being executed, Link will see Anju crying on the second floor of the house because she wanted to stay in Clock Town to wait for Kafei.