Zelda Wiki
Register
Don't have an account?
Sign In
Advertisement
in: Reptilian Enemies, Bosses, Bosses in A Link to the Past, Bosses in Ancient Stone Tablets 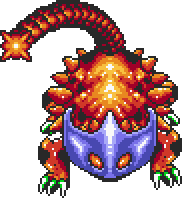 Palace of Darkness
Palace of the Four Sword

The Helmasaur King is a boss in A Link to the Past.[1] It guards the first Crystal in the Palace of Darkness, the first dungeon found in the Dark World. It is a large quadrupedal reptile with a large mask on his head, and a long tail with a deadly mace-like tip. It must be defeated before the first Crystal can be acquired and the first Maiden can be rescued.

Before he can be damaged, his mask must be destroyed with the Magic Hammer or Bombs. The Magic Hammer takes considerably more hits and requires getting up close but it can be done faster overall, while it only requires five Bomb hits and you can keep your distance to avoid damage if you use them carefully. The monster fights by spitting fireballs that will split into three, and then each into four as they disperse. To avoid those, Link must attempt to stay at right angles to the fireballs, as they always split diagonally. It will also attack by swinging its long tail like a whip, which can be avoided by staying up close to the monster's head, or keeping a large distance where possible.

After attacking the helmet on its face enough times, it will shatter to reveal the face of the monster, and a large green emerald on his forehead appears. This can be hit with the arrows or the sword. When struck enough times, he is defeated and explodes. When defeated, he leaves behind a Heart Container and the first crystal in which one of the seven maidens is entombed

In the Game Boy Advance version, the Helmasaur King returns in the Palace of the Four Sword, a secret dungeon only available after beating both A Link to the Past and Four Swords. This Green Helmasaur King guards the Red Four Sword and is considerably stronger than the original, although the battle is similar at first. Once the mask is destroyed however, instead of spitting fireballs, it will drop small blue Helmasaurs from its mouth, and the gem will be invulnerable to arrows. Furthermore, once the gem is damaged enough the mask will reform, and Link will be forced to destroy it again. Once the second mask is destroyed, the gem will have been replaced by a huge third eye (identical to Vitreous's) on its forehead. A single Silver Arrow to this eye is enough to destroy him at this point.

The Helmasaur King appears as the boss of the Level 3, in Week 2 of Ancient Stone Tablets. Its behavior and strategy is the same as in A Link to the Past, although as with other returning bosses, the boss is weaker than in the original game. There are less Heart Containers available prior to this battle, however, making it still a dangerous opponent.