Zelda Wiki
Register
Don't have an account?
Sign In
Advertisement
in: Enemies, Common Enemies and Traps, Reptilian Enemies,
and 8 more

Not to be confused with Helmasaur King. 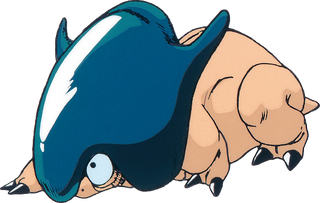 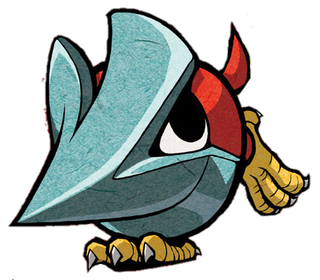 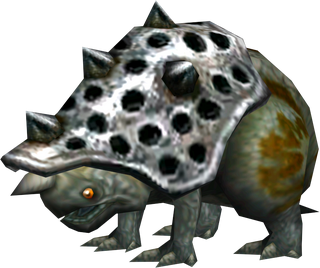 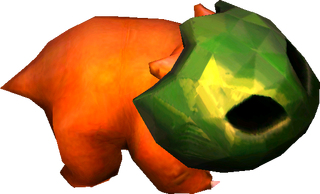 Helmasaurs differ in their appearances across the series, varying from saurian, insectoid, porcine or avian-like creatures. They wear a protective mask or helmet over their faces or front bodies, and typically charge at Link when they see him, often attempting to knock him over or off platforms. Their iron masks protect them from most direct attacks to the face; however, in many games their masks can be removed, often with the Hookshot or similar items. As their backsides are often left exposed, they can also be attacked normally from behind. Alternately, some items, such as the Hammer or Bombs, are powerful enough to penetrate their masks' defenses.

Several Bosses have also appeared in the series that take on a similar form and wear masks that must also be destroyed to defeat them, the most notable being the Helmasaur King, which is named after these creatures. Similar Bosses that have also appeared include the Helmaroc King and Gemesaur King.

Helmasaurs appear as orange sauropod-like creatures wearing green masks that obscure their entire face in A Link to the Past. They inhabit Dungeons of the Dark World, specifically the Palace of Darkness, Skull Woods, Turtle Rock, and Ganon's Tower. They also appear in the Palace of the Four Sword in A Link to the Past & Four Swords. When Link enters their space, they immediately rush after him and will constantly pursue him around the entire area. They often appear in narrow spaces or in areas overhead pits, where thy will try to knock Link down as they ram into him. Helmasaurs' masks protect them from being attacked directly with the Fighter's Sword, which will simply knock them back. Their exposed backsides, however, can be struck to defeat them, although doing so is difficult due to the enemy's constant pursuit.

Helmasaurs can be killed with a few other items, including throwing Skulls at them, using Bombs, shooting Arrows with the Bow, or three strikes from the Magic Hammer. All three Medallions are also effective against them, with the Ether Medallion turning Helmasaurs into Fairies. They can also be stunned using the Hookshot. The masks of Helmasaurs cannot be removed or destroyed in A Link to the Past.

A Link to the Past also features a much bigger Helmasaur, known as the Helmasaur King, as the Boss of the Palace of Darkness. It also appears again in the Palace of the Four Sword.

Helmasaurs are creatures whose faces are fully protected by steel masks in Link's Awakening. They do not charge at Link, but instead slowly move at random. Their masks protects them from nearly all attacks to the face, including the Sword; however, their backsides are vulnerable to attack. Different from previous appearances of Helmasaurs, these enemies can now have their masks removed by using the Hookshot on them when they are facing Link. When their mask is removed, they become surprised and start walking much more quickly, but become completely vulnerable to all attacks from any direction. They can also be attacked with Bombs and Magic Powder even when they are still masked. They appear in the Angler's Tunnel, Catfish's Maw and Eagle's Tower.

Hiploops take on a much different appearance as insect-like creatures in Majora's Mask. They come in two forms: an unmasked red version, and a green version wearing a blue mask. Hiploops are hotheaded creatures that will immediately charge at Link when they see him, attempting to knock him off the platform they are on. Unmasked Hiploops appear at the Woodfall swamp crater, where they crawl along the boardwalks and attempt to shove Link off. Since they are unguarded, they can be freely attacked with the Sword from any direction. Deku Link's Spin Attack will stun them, though only briefly. Their attacks can be blocked with a Shield to knock them back, providing an opportunity to strike back. Masked Hiploops appear in the Stone Tower Temple, where their faces are protected by the masks they wear. They can either be attacked from behind or have their masks pulled off using the Hookshot.

Iron Masks make no effort at charging at Link in Oracle of Seasons, instead wandering at their own leisure with their faces covered by steel masks. Iron Masks can be defeated by striking their exposed backsides when they turn around, although a few other items are also effective against them. Bombs can be used to defeat them instantly even with their masks still intact. Their masks can be removed by using the Magnetic Glove on any polarity. They appear in Unicorn's Cave and Hero's Cave.

Iron Masks make no effort at charging at Link in Oracle of Ages, instead wandering at their own leisure with their faces covered by steel masks. As before, Iron Masks can be defeated by striking their exposed backsides when they turn around, although a few other items are also effective against them. Bombs can be used to defeat them instantly even with their masks still intact. Their masks can be removed by using the Switch Hook on them, although only when they are facing Link, otherwise the item will merely switch places with the enemy. They appear in the Moonlit Grotto and Jabu-Jabu's Belly.

Helmasaurs take on the appearance of bird-like creatures wearing masks in Four Swords. These Helmasaurs blindly charge around the area and at the Links in a straight line. Their backsides cannot be attacked despite being exposed. They can only be defeated by using the Magnetic Glove on them, which will rip off their masks on any polarity. Once their masks are removed, the Helmasaurs are revealed to have parrot-like faces. In this state they will no longer charge at the Links, but instead scamper about in alarm. They appear in the Chambers of Insight, Death Mountain, and Vaati's Palace, as well as the Realm of Memories and the Hero's Trial.

Helmasaurs have an identical appearance to the bird-like Helmasaurs of Four Swords in The Minish Cap. As before, they constantly charge around the area whenever Link is in close proximity. They appear in the Cave of Flames and in other Caves around Hyrule. Unlike the Helmasaurs of Four Swords, these enemies' backsides are vulnerable and can be attacked with the Sword when they are turned around. Their masks can be pulled off using the Gust Jar. Bombs can also be used to defeat them instantly.

Helmasaurs appear as animals that share traits with saurians and rhinoceroses, as well as pigs, in Twilight Princess. Instead of wearing a mask on their faces, Helmasaurs wear a plate of spiked armor over their heads and part of their backsides. Helmasaurs keep to themselves in small groups, but when they spot Link, they squeal and charge at him directly until they slam into a wall. Like previous incarnations, Helmasaurs can be attacked from behind by striking their partially exposed behind. Once Link obtains the Clawshot, he can use it to pull off the armor plates from Helmasaurs and freely attack them from any angle. Their plates are notably heavy, and can be used in certain instances to hold down Switches. Unlike past appearances, Bombs are useless in penetrating their armor. Helmasaurs can be found in the Lakebed Temple, the Temple of Time, and the City in the Sky.

Helmasaurs are closely based on those from A Link to the Past in A Link Between Worlds, appearing as orange sauropods wearing green masks. Like their previous appearance, they will charge after Link whenever they see him, although this time they do not make a constant effort at pursuing him and will stop attacking when Link moves too far away or becomes out of reach. Their masks protect them from frontal attacks, leaving only their backsides vulnerable; however, since they are frequently encountered in narrow pathways above pits, they can simply be shoved off the ledge by striking their guarded face to push them away. They appear in the Dark Palace.

A giant Helmasaur wearing a mask adorned with jewels, known as the Gemesaur King, also appears as the Boss of the Dark Palace.

Helmasaurs in Tri Force Heroes are based on those from A Link Between Worlds. They will charge after any of the Links who come near them, and will usually make an active effort in pursuing them until they move too far away. As before, they can be attacked from behind. These enemies can also have their masks pulled off their faces by using the Gripshot, which will expose their entire body to attack. They appear in the Floating Garden as well as the Scorching Zone of the Den of Trials.

The name Helmasaur is a portmanteau of "helmet", referring to its mask, and "saurian", in reference to its reptile-like shape.