This article is about the recurring Boss in The Legend of Zelda series. For the Enemy, see Kargarok. 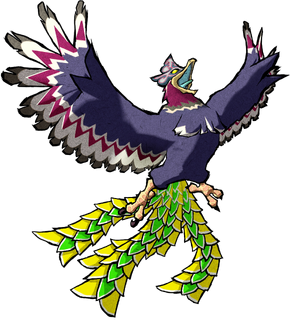 The Helmaroc King is a recurring Boss in The Legend of Zelda series.[2][3][name reference needed]

In The Wind Waker, the Helmaroc King resides in the Forsaken Fortress, and is a servant of Ganondorf.[4] He is also the primary minion sent out by Ganondorf to search for Princess Zelda. He appears early on in the game, flying around Outset Island with Tetra in his claws before being shot out of the sky by Tetra's Pirate Crew. The Helmaroc King then drops Tetra and captures Link's sister, Aryll, mistaking her for the young pirate captain.[5] It is later discovered that the Helmaroc King was bringing young girls with pointed ears to Ganondorf in an effort to find Princess Zelda,[6] as Ganondorf wished to find the princess so that he could steal her piece of the Triforce.[7] When Link travels to the Forsaken Fortress to save his sister, the Helmaroc King captures him and throws him into the sea at Ganondorf's command.

Later in the game, Link returns to the Fortress in an attempt to save Aryll once again. He successfully frees his sister and the other kidnapped girls, Mila and Maggie, while Tetra and her pirate crew distract the giant bird.[8] Link is then attacked by the Helmaroc King after Tetra and her crew flee.

At the beginning of the battle, the tower containing the prison cells is flooded. The Helmaroc King follows Link as he runs along the wall to avoid the rising water. While he does so, Link must avoid the bird and the enemies along the steps of the wall. Once he has reached the top, the bird will swoop down and stand right in his way. Link must then use the Skull Hammer on his helm, making the Helmaroc King fall into the rising water, giving Link the chance to climb out of the flooding tower. At this point, the floor of the tower begins to close and the bird flies up out of the tower to challenge the hero. If Link falls off and into the water, he can get back up by using the Grappling Hook on the torches.

The Helmaroc King performs three attacks. During the first one, he lands on the ground, walks toward Link, and attempts to impale him with his beak. If he misses Link, his beak gets jammed in the floor. This gives Link a chance to use the Skull Hammer and drive it into the Helmaroc King's helm. This produces a large crack on the bird's helmet. The bird can also fly around the tower trying to run over Link by scratching his claws on the floor, as well as floating in the air and flapping his wings in an attempt to blow the hero into the spikes surrounding the arena.

After Link pounds the King's helm with the Skull Hammer several times, it will crack and fall off. Once the bird's crest is exposed, he will become more frantic. The strategy is still the same; Link must wait until the bird tries to peck him with his beak. The main difference this time is that the Master Sword can be used to deal more damage. After repeating the pattern three times, the Helmaroc King flies up into the air and explodes into black and purple smoke, leaving behind a Heart Container.

In Four Swords Adventures, the Helmaroc King is a boss Link must face on The Mountain Path on Death Mountain. The Helmaroc King is designated to stop the Links from entering the Tower of Flames. This monstrous bird starts the battle by swooping down upon them two times, then attacking by dropping rocks upon the heroes. After that, the King repeats the process. In order to defeat him, the Links are required to daze the bird with their Bombs and then destroy the bird's mask. After the mask is destroyed, the Links can defeat him by using their Swords.

In "A New Disturbance", under the name Great Bird, the Helmaroc King leads the Great Bird's Forces, of which it is the only member. The Monster Forces, led by the Boss Blin, manage to drive it from its roost in the Forsaken Fortress, causing it to attack the Hyrulean Forces led by Link and Tetra in Windfall. Link and Tetra can force it to retreat by attacking it. The Helmaroc King acts as little more than a distraction, and it cannot be defeated as the main objective is to defeat the Boss Blin and the Monster Forces instead. After the defeat of Boss Blin and its Forces, Link spots the Helmaroc King in the sky and notices that it is carrying Tetra in its talons. Link rushes after the bird to save Tetra.

In "The Search for Cia", the Helmaroc King then roosts in the Gerudo Desert. While it is resting, Tetra manages to sneak away and seeks the aid of Lana and the Hyrulean Forces, who had entered the desert to close the Gate of Souls that opened there. Eventually, the Helmaroc King awakes and tries to recaptures Tetra. She calls Lana and the recently arrived Link to save her. Together they manage to destroy the Helmaroc King's mask, forcing it to retreat momentarily. However the bird soon returns, only to be killed by the combined might of Lana, Link and Tetra.

When defeated in battle, the Helmaroc King may occasionally drop its Plume as a silver Material, and rarely its Mask as a gold Material.