Not to be confused with the Parry Attack, a similar technique used in The Wind Waker. 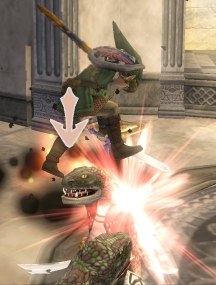 Link using the Helm Splitter on a Lizalfos.

Hitting Enemies on their heads[2]

The Helm Splitter is an ability in Twilight Princess.[3]

This skill proves useful when the enemy is too fast to successfully land a Back Slice on. The move is initiated by a Shield Attack to stun the enemy, then by attacking again, Link will jump in the air above the foe and slice its head in a vertical flipping motion.[6] After performing the Helm Splitter, Link will land behind his opponent, giving him a chance to continue attacking the foe from behind. This skill is most effective against enemies with helmets, such as Darknuts.