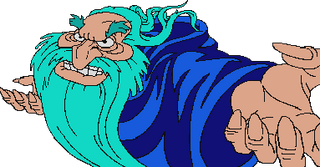 Hektan is a wizard and a minion of Ganon. He was ordered by Ganon to imprison Lord Kiro, who had tried to stop Ganon from capturing King Harkinian.[1] Hektan kept him in Dodomai Palace, Duke Onkled's castle, where Princess Zelda later confronts him. If Princess Zelda speaks to Impa inside the palace, they witness Hektan taunting Princess Zelda by disappearing and reappearing. He then demonstrates his magic power by destroying an Armos in a single blast. Princess Zelda however prevails and defeats him, and he dissolves into a pool of bubbling liquid and leaves behind a beating Life Heart.

Hektan is capable of unleashing fireballs to attack Princess Zelda. He is weak to the Sword, and a single slash will defeat him. Although while he seems to possess the ability to vanish in one of his cutscenes, he remains visible throughout the battle.

Hektan may be derived from Hecate, the Greco-Roman goddess of witchcraft.