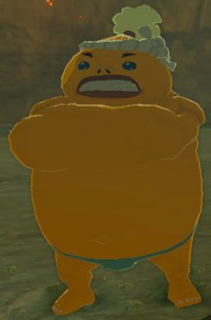 Heehl is a character in Breath of the Wild.[4]

Heehl is one of the Goron Blood Brothers, a group consisting of himself and his brothers Bayge and Kabetta. Heehl and his brothers are passionate about training in difficult feats of strength and endurance. They live in a house in southern Goron City, which is now abandoned and left with a Sign saying they have gone to Gut Check Rock to train.[5]

Heehl is involved in the "Test of Will" Shrine Quest at Mount Nabooru in the Gerudo Highlands. Heehl and the other Goron Blood Brothers have traveled to their ancestral training ground to train themselves to withstand the heat in Goron City.[6][7] They challenge Link to join them by sitting in a ring of fire to see who can withstand the longest.[8][9][10] When Link accepts their challenge, Heehl remarks that he has a fiery passion.[11] Heehl is the second Goron to collapse, at which point he appears to be hallucinating.[3]

After Link is declared the winner, Heehl allows him to attempt a harder contest, which involves standing on an even hotter platform.[12][13] When Bayge asks Link if he thinks it is a bad idea,[14] Heehl says that he is right.[15] When Link passes this challenge, Heehl will be impressed by his display.[16] Joloo Nah Shrine will then emerge from the ground, and the Shrine Quest will be completed.

Heehl also appears at the base of Gut Check Rock in northern Eldin Canyon, standing next to one of the Updrafts near the main gateway. He recognizes that a need to build up his strength must have brought him there and welcome him.[17] He encourages Link to talk to Bayge to attempt their training.[18] After completing Bayge's Gut Check Rock Challenge, he commends Link on his success.[1]

During the "EX Champion Daruk's Song" Main Quest, which is exclusive to The Champions' Ballad DLC Pack, the Goron Blood Brothers can be found at Darb Pond. They have decided to train at this location like Daruk did, since they believe it will allow them to be more like him.[19] Heehl explains that the goal of this training is to stand on the Glowing Ring atop the Pond's Lava.[20] Before attempting it, however, the brothers decide to strategize.[21]

When spoken to afterwards, Heehl says that this training is intense.[22] After Link manages to pass through the Glowing Ring, Heehl wonders if someone managed to complete the training.[23] However, he thinks this is impossible, as only Daruk or one of the Goron Blood Brothers could have done such a thing.[24]