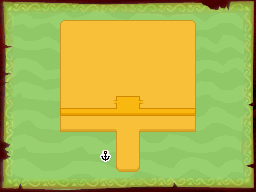 The map of Harrow Island

Harrow Island is hidden north of a triangle of rocks in the northwest of the southeastern sea. Its location is revealed by a Yook on the Isle of Frost after Link has obtained the Azurine.[2] It does not appear on the Sea Chart until he sails close enough for Ciela to spot it and mark its location.[3]

Harrow Island is home to a Digging Game. It is separated into two by a wall that spans the width of the Island. The southern half contains a geyser that becomes active once Link pays to play the minigame. This allows him to walk on top of a raised section, where there are a few Jars, as well as access to the northern half where the minigame takes place. This area is a large, empty field divided into four parts by stone tiles.

The minigame is run by a Gossip Stone north of where Link docks the SS Linebeck. For a fee of 50 Rupees, Link can dig up 10 treasures and keep them.[4] The treasures that Link can find are Rupees, Treasure Maps, and Rupoors.[5][6] The Gossip Stone will notify Link when he has dug up his tenth treasure.[7] Link can leave the Island at any time, but his fee will not be refunded.[8] If after 10 treasures have been dug up Link digs two more times, he will be fined 100 Rupees by the Gossip Stone at the entrance.[9] If he digs once more, he will be fined all of his current Rupees leaving him with nothing.[10] If Link digs again, he will be banned from playing.[11] To play again, he must pay 300 Rupees.[12]