This page is about the items in Zelda's Adventure and Hyrule Warriors. For other uses, see Harp (Disambiguation). 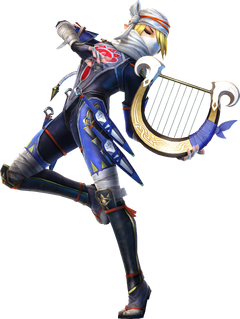 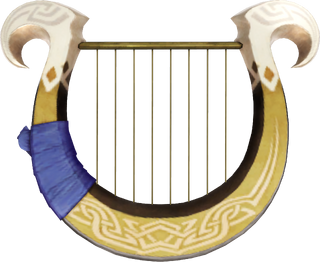 Defeating enemies
The Harp is a recurring Item in The Legend of Zelda series.[1][name reference needed]

In Zelda's Adventure, the Harp is found in a tunnel north of the Mobilin's Head Inn, which connects between the Plain of Andor and the Seacoast Plain. Playing the Harp allows Princess Zelda to warp back to the beginning of a dungeon.

In Hyrule Warriors, the Harp is a class of Weapon used by Sheik. It is associated with Lightning. However, Sheik can play up to five songs that are associated to each Element in Hyrule Warriors, which produces unique attacks that correspond to the Element when the Strong Attack button is pressed. These songs are: "Serenade of Water", which is Water; the "Bolero of Fire", which is Fire; the "Song of Storms", which is Lightning; the "Nocturne of Shadows", which is Darkness; and the "Prelude of Light", which is Light. While the Harp is her main Weapon, Sheik also uses kunais as part of her moveset.

In Hyrule Warriors Legends and Hyrule Warriors: Definitive Edition, the Multi-Element Weapon is the Shining Harp, which is associated with both the Elements of Lightning and Light.

Against commander enemies, Sheik rapidly slashes away at the enemies caught in the attack's radius with her kunai, before turning her back at them and finishing the blow with a powerful sound wave strummed from her Harp. Against Giant Bosses, Sheik uppercuts the monster with her kunai before disappearing and reappearing in the air, coming down with a double kunai stab at the foe.

Sheik hovers over the ground, while several crystal Harps float in a ring around her. She then strums the Harp, causing a rainbow-colored ring of light to expand and contract, bouncing enemies in and out. The final strum flings enemies away. This attack deals damage in wide circle around Sheik and carries no Element.

Upon activation, Sheik focuses her power in her Harp and then bursts in Lightning energy. The Focus Spirit Attack has Sheik turns her back at the enemies in front of her and play "Minuet of Forest", causing a small forest of trees to grow beneath the enemies' feet. When the Focus Spirit Gauge is depleted, Sheik spins two kunai in her hands and then unleashes Lightning energy around her.