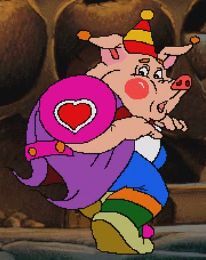 Sword
Harlequin is the second boss in The Faces of Evil.[1] He is located at the Harlequin Bazaar, and is encountered again at the Lupay area.

Harlequin is an anthropomorphic pig who is a minion of Ganon. He is located at his Face of Evil, the Harlequin Bazaar. There he enslaves Koridians by turning them into Goriya minions after they lose all of their Rubies while gambling at his casino.[2] He also has Odranoel the astronomer imprisoned at the end of his Bazaar. The source of Harlequin's magic seems to come from the heart-shaped insignia on his sleeve, which releases a yellow beam. He also demonstrates the ability to disappear and reappear in puffs of smoke, and uses this to taunt Link. Yet Link prevails and defeats Harlequin, who deflates like a balloon and drops the Key to the astronomer's room.

Harlequin is later encountered again at the Lupay area, and is defeated the same way.

Harlequin has a simple pattern where he moves back and forth in the room he is fought in. He relentlessly throws projectiles at Link when he is within his line of vision. However, these can be blocked by Link's Shield. Harlequin is defeated with just the Sword and takes several strikes. Although while he seems to possess the ability to vanish in his cutscenes, he remains visible all through his battles.