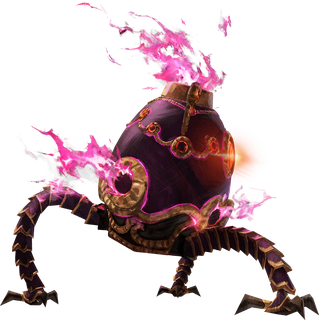 Catalyst of the Calamity[1]

Please improve it as you see fit. Editing help is available.
This article has been flagged since November 2020.

From the Malice from the future of the Great Calamity, Calamity Ganon had sent parts of itself through the Gate of Time created by Terrako to prevent any changes to its awakening. By possessing the inactive Terrako of 100 years in the past, it became the harbinger of Calamity Ganon and was soon allied with Astor after devouring his fellow cultists. Using what power it has, it uses its Malice to possess a Guardian Stalker to attack Zelda on her way to the Ancient Tech Lab and reveal Calamity Ganon's awakening in the future to Astor and the Yiga Clan.

It leads an army of monsters to attack Rito Village which is defended by the soon-to-become Four Champions Revali and his Rito brethren, thus creating paranoia among the Rito to attack Link when they were to see Terrako with him.

Harbinger Ganon reveals itself to Zelda and her allies floating beside Astor before they enter the Malice-filled Hyrule Castle, opening up its body to draw out its Guardian Weapons and claws to intimidate them. Zelda in particular noticed its similarities to Terrako[2] and realizes that Harbinger Ganon must have been responsible for causing the Rito to become paranoid and hostile to her group.[3] It awaits inside a gatehouse of the castle, hanging upside-down in a pile of Malice on the ceiling, engaging Zelda and her forces as soon as they arrive.

After being defeated along with Astor, just before Astor could call out a command to destroy the heroes, Harbinger Ganon consumes the prophet for his power, using it to transform itself into its true form; Calamity Ganon.

The Guardian of Remembrance DLC shows more of Harbinger Ganon's story, that starting after it possessed the Terrako of the past, it went searching for the Terrako from the future. It ambushed the Guardian in the Coliseum, absorbing a White-Maned Lynel and later two Black Moblins to strengthen itself. It was seemingly defeated by Terrako, but quickly transformed into its Mutated Ganon form, burying Terrako underneath some rubble and deactivating it, where it was later found by 2 Bokoblins.

Later, it once again ambushed Terrako at the Coliseum, this time assuming its Mutated Ganon form immediately. It bested the Guardian once again, but thanks to the activation of an Ancient Furnace by Purah and Robbie, Terrako was powered up and was able to defeat Mutated Ganon, causing it to return to its original form as it was carried off by Yiga Clan members.