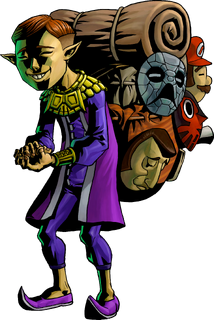 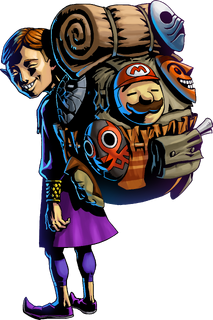 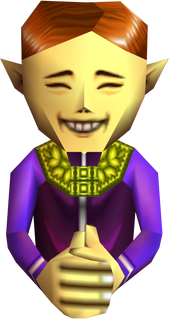 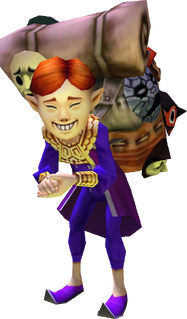 The Happy Mask Salesman,(OoT | MM3D | OoA | SSBB)[1][note 1] also known as the Happy Mask Shop Owner,(OoT)[6] is a recurring character in The Legend of Zelda series.

In Ocarina of Time, the Happy Mask Shop Owner opens the Happy Mask Shop in the Market after Link delivers Zelda's Letter to the Death Mountain Trail Gatekeeper in Kakariko Village.[7] Once the shop is open, Link can speak to him to become a "happiness salesman." This starts a Mask Trading Sequence where Link can borrow each of the Shop's Masks and sell them to people.[8] After selling all four Masks, Link receives the Mask of Truth, which allows him to understand what Gossip Stones say.[9] Along with this, he can return to the Happy Mask Shop to borrow all of the Masks he has previously sold as well as four new Masks.

The Happy Mask Shop Owner disappears after Ganondorf takes control of Hyrule Castle and forces the residents of Hyrule Castle Town to flee. He is last seen during the ending credits celebrating at Lon Lon Ranch.

When Link arrives in Termina, he is also assaulted by the Skull Kid, who steals his Ocarina of Time and rides away with Epona. Link chases after the Skull Kid, who turns him into a Deku Scrub. Tatl, who was left behind by the Skull Kid and Tael, decides to follow Link. The two of them make their way to the Clock Tower, where they meet the Happy Mask Salesman. He reveals that he has been following Link, and that he knows of a way to return him to his former self.[13] However, he first needs to reclaim his Ocarina from the Skull Kid.[14] In exchange, the Salesman asks Link to return the "precious mask" that was stolen from him within three days, before he has to depart from Termina.[15]

Just a few hours before the Moon falls, Link and Tatl confront the Skull Kid at the top of the Clock Tower. The hero retrieves his Ocarina and plays the "Song of Time", which transports him back to the beginning of the three day cycle. He then returns to the Happy Mask Salesman with his Ocarina, who teaches him the "Song of Healing", a melody that heals troubled spirits and turns them into Masks.[16] After the song is played, the spirit of the Deku Butler's Son is encased in the Deku Mask and Link returns to his Hylian form.[17] Having fulfilled his promise, the Happy Mask Salesman asks for his end of the deal. After learning that Link failed to retrieve Majora's Mask, he becomes distressed and shakes Link out of frustration.[18] He tells Link of the great lengths that he went through to obtain the Mask, as well as its true nature. He explains that if the Mask is not taken back from the Skull Kid, something horrible will happen.[19] He begs Link to recover the Mask for him, once again stressing the fact that he must leave in just three days, which is the day of the Carnival of Time, as well as the time remaining before the Moon crashes into Clock Town. As Link and Tatl set off to recover Majora's Mask, the Happy Mask Salesman waits patiently inside the Clock Tower for their return.

Once Link successfully defeats the evil inside Majora's Mask, the Moon vanishes, thus saving the land of Termina from destruction. The Happy Mask Salesman finally reclaims his Mask, which has seemingly lost its evil power.[20] As he is in the middle of his travels, he bids farewell and implies that Link should return to Hyrule.[21] After commenting on the number of people who Link made happy, he walks away and disappears.[22]

The Happy Mask Salesman seems to know a lot about Link and his previous adventures, mentioning that retrieving Majora's Mask should be of no difficulty to someone like him.[23] Moreover, if Link wears a Mask and speaks to him with it on, he will say something about that Mask: what emotion it is filled with, its rarity, or something special about it.

In Oracle of Ages, the Happy Mask Salesman owns the Mask Shop on the outskirts of Lynna City. He is starving and will give Link the Doggie Mask in exchange for something to eat, namely the Tasty Meat from the Tokay cook.[24] His appearance is almost identical to previous games, the one notable difference being his ears which are rounded and not pointed.

In the Majora's Mask manga by Akira Himekawa, the Happy Mask Salesman's role appears the same as in the game. Towards the final battle with Majora's Mask, he is shown far more sinister than previously.[25] After the battle, the Happy Mask Salesman appears before Link still wearing the Fierce Deity's Mask to take his mask. Link strikes out at him with his Sword and tells him to leave, slicing various masks in half, possibly in an attempt to strike Majora's Mask. He misses, however, and the mysterious man picks up the mask and fades away laughing.

In Super Smash Bros. Brawl, the Happy Mask Salesman appears as a Sticker.

In Super Smash Bros. Ultimate, the Happy Mask Salesman appears as a Spirit with the ability, Trade-Off Attacks 🠅, which grants a Fighter the ability to start battles with higher attack power, but with 30% Damage already dealt to them.