This article is about the Boss from Majora's Mask. For the recurring Enemy, see Gyorg; for the Boss in The Minish Cap, see Gyorg Pair. 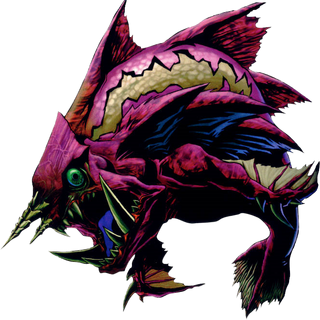 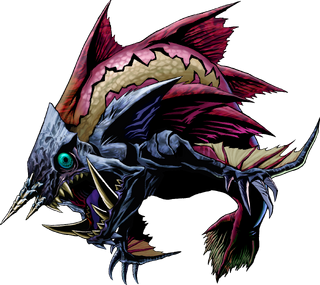 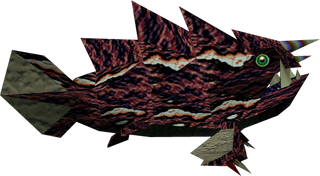 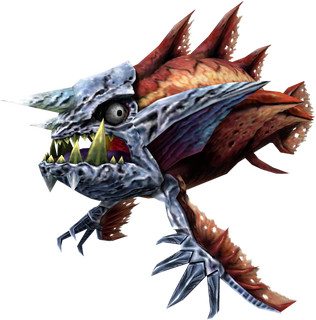 Gyorg (pronounced /ɡjɔːɹɡ/, gyorg)[citation needed] is the Boss of the Great Bay Temple in Majora's Mask.[1] It is Gyorg who imprisoned the third of the Four Giants and is responsible for the waters of the Great Bay Coast becoming polluted and dangerous.[2][3] This also causes an abnormal climate shift in the Great Bay area.[4] In Majora's Mask 3D, its head and pectoral fins have bony armor, and its fingers are elongated.

Gyorg attempts to knock Link off the platform by ramming into it. If Link falls into the water and gets too close to Gyorg, it will swallow him and then spit him out, causing damage. Occasionally, Gyorg will leap out of the water and soar across the platform to hit Link. When Gyorg is about to attack, a rushing sound can be heard. Bubbles will also appear above it, allowing Link to anticipate Gyorg's attacks. Partway through the battle, Gyorg will spawn smaller fish to distract Link in the water. If Link falls in the water, they will seek him immediately. Zora Link's electric barrier can be used to easily defeat them.

To defeat Gyorg, Link must use either his Bow or his Boomerang-fins as Zora Link to stun it. He must then dive in the water to attack Gyorg. Zora Link's electrical barrier is particularly effective at this stage. Alternatively, Zora Link can stun Gyorg in the water using his fins or his electrical attack. Once Gyorg is defeated, it will shrink in size until there is nothing left. Link will receive a Heart Container and Gyorg's Remains. This will also free the Giant who was imprisoned in Gyorg's body.[5] Afterwards, Great Bay will return to normal.[6]

In Majora's Mask 3D, Gyorg now has an eye inside its mouth which Link must attack. In order to do so, Gyorg must be stunned by attacking it with Arrows while it is swimming on the water's surface. After taking some damage, Gyorg may briefly surface and grab the platform in the center to directly charge at Link. If Gyorg continues to take damage, it will eventually bash the platform in the middle, causing it to sink. Link must then swim as a Zora while avoiding Gyorg who tries to inhale him. During this phase, Gyorg will release fish from its mouth which will attack Link. Spikes will also pop out of the ground, and Zora Link needs to hit their chains so Gyorg inhales one of them.[7]