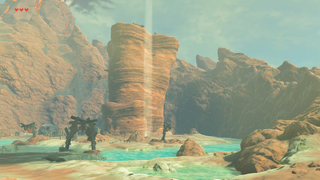 Gut Check Rock is a location in Breath of the Wild.[1]

Gut Check Rock is a colossal pinnacle in northeastern Eldin Canyon, in close proximity to Eldin's Flank. The pinnacle stands in the middle of a Hot Spring river moat. Its body is sectioned into two halves, consisting of a much broader base and another pinnacle on top. Its rockface is otherwise entirely smooth, making climbing it difficult and strenuous. A number of wooden platforms are built along its side as rest stops between climbing. Gut Check Rock has two Updrafts along its sides, which can be ridden using the Paraglider, reducing the need to climb. At the very top of the pinnacle is Gorae Torr Shrine in the center, along with a Cooking Pot nearby.

Initially when Link first arrives at the apex of the pinnacle, Bayge of the Goron Blood Brothers can be found sitting at the Shrine. Gut Check Rock is an important location to the Goron Blood Brothers as it serves as their training ground.[2] The Shrine, by extension, is considered sacred to them as the only proven Goron men may approach it, and thus Bayge refuses to move for Link.[3] However, Bayge agrees to move if Link can clear the Gut Check Rock Challenge mini-game, in which Link must climb the pinnacle while collecting 100 Rupees to pass.[4] This initiates the Shrine Quest, "The Gut Check Challenge".

After Link has successfully completed the Challenge, Bayge will happily let Link approach the Shrine. He will also begin to offer a harder version of the Challenge, called the Super Gut Check Challenge, in which Link must collect 300 Rupees.

At the base of the Gut Check Rock are Heehl and Kabetta, the other two Goron Blood Brothers. Heehl is standing next one of the Updrafts, while Kabetta is laying down in exhaustion from failing the Challenge.[5][6]