Zelda Wiki
Register
Don't have an account?
Sign In
Advertisement
in: Enemies, Common Enemies and Traps, Nintendo Enemies,
and 11 more 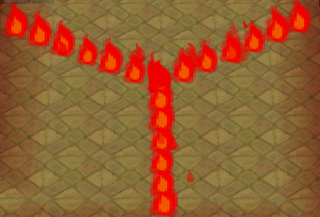 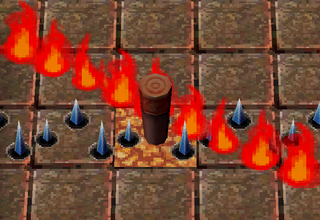 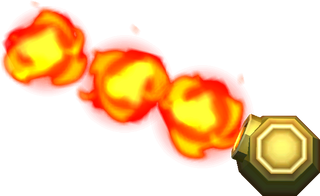 Dungeons
Guruguru Bars are recurring Dungeon traps in The Legend of Zelda series.[name reference needed] They are identical to the Fire Bars of the Mario series. Guruguru Bars go unnamed in The Minish Cap.

Guruguru Bars appear as bars of endlessly spinning flames attached to a block or statue. If they touch Link, they will cause damage to him and set him on fire for a time. This can be especially hazardous in narrow spaces or in areas with nearby pits, as these can make the flames difficult to avoid and the flames may knock Link down a hole. Guruguru Bars first appear in A Link to the Past, where they are always the same length, though subsequent games have much longer Guruguru Bars, with some having multiple spokes spinning around a single block.

As traps, Guruguru Bars cannot be destroyed, though they can often be avoided through the use of the Roc's Feather or Roc's Cape.

Guruguru Bars appear in Dungeons in A Link to the Past. Link can pass through their flames harmlessly by using the Magic Cape or the Cane of Byrna.

Guruguru Bars appear in Dungeons in Four Swords Adventures. In some Dungeons, it is possible to change the direction of their spinning bars of flame by using certain Switches.

Guruguru Bars appear in Dungeons and in caves across Hyrule in The Minish Cap, both while Link is regular-sized and while he is Minish-sized. They can be leapt over using Roc's Cape. If Link uses the reforged Picori Blade to split himself into copies, a copy touching the flames of a Guruguru Bar will have the same damaging effect as if Link himself came into contact with it, dispelling the copies and setting Link on fire for a time.

Guruguru Bars appear in Dungeons in Tri Force Heroes, where their flames can be temporarily doused by the Water Rod. There are also stationary versions of the trap that do not spin; these appear in Secret Fortress, and must be doused with the Water Rod to press down Switches for the Links to advance.