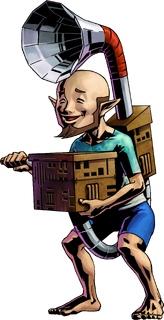 Guru-Guru is a recurring character in The Legend of Zelda series.[2]

Guru-Guru is the Gorman Troupe's musician in Majora's Mask.[3] Guru-Guru is seen at night in the Laundry Pool area of Clock Town playing his Phonograph since he has been kicked out of his room for practicing too loud.[4] He is usually a happy person, and long ago was a member of an animal troupe. However, he was jealous of the dog being the leader of the troupe, who could always get any animal to follow his command.[5][6] As such, Guru-Guru stole the dog's mask, called the Bremen Mask.[7] He gives Link the mask as a reward for listening to his story and to get rid of his guilt.[8][9]

He also appears during the day in the Stock Pot Inn in the room at the end of the hall.

His name is a Japanese onomatopoeia for "turning round and round, going around in circles," which also happens to be the Phonogram Man's favorite expression in Ocarina of Time.[13]