Not to be confused with Gully, a character from Skyward Sword. 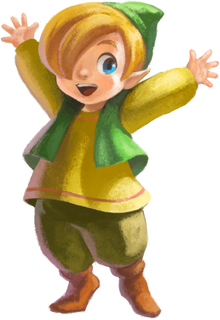 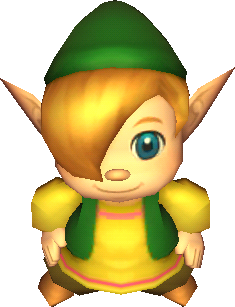 Gulley is a character in A Link Between Worlds.[2] He is the son of the Blacksmith, and one of the Seven Sages.

Gulley and Link know each other well prior to events of A Link Between Worlds. Gulley visits Link frequently to wake him up in the morning,[3] because Link is often late for work.[4]

Gulley is trapped inside a Painting by Yuga shortly after Link battles Yuga in the Eastern Palace. Link meets the Blacksmith's Wife, Gulley's mother, south of Kakariko Village as she is looking for Gulley.[1] Instead of finding Gulley, Link and the Blacksmith's Wife find a Pouch that Gulley had intended to give to Link as a gift.

After Yuga obtains the Triforce of Power, Gulley's Painting is hidden inside the Dark Palace. Link rescues Gulley after defeating Gemesaur King. Gulley is very young; he is aware of his powers as a Sage, but does not fully understand what it means to be one of the Seven Sages (he refers to the group of Sages repeatedly as "Sevensages").[5]

Gulley remains in the Chamber of Sages until the Triforce is returned to Hyrule. He then returns home.

Sages in The Legend of Zelda series
Community content is available under GNU Free Documentation License unless otherwise noted.
Advertisement