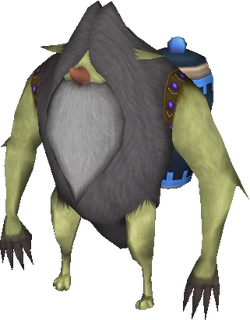 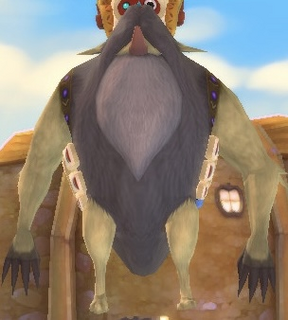 Guld is a character in Skyward Sword.[2]

Guld is the elderly leader of the Mogmas of the Eldin Province. He is hoping to retire soon, and is searching for a new leader to replace him.[1] He hopes to live another in land upon retiring where he can develop new digging techniques.[3]

Link first meets Guld early in the Fire Sanctuary. The old Mogma at first thinks that the hero is a Bokoblin.[4] However, after seeing his Digging Mitts, Guld relaxes and tells Link that he is the Mogmas' leader as well as the inventor of the Digging Mitts.[5] The elder then informs the hero that there has been talk about a huge treasure, and that the key to finding this treasure revolves around a "sleeping statue" located deep within the Sanctuary.[6]

Later on, Kina, one of the owners of the Lumpy Pumpkin, remarks that plowing the field is tiresome, and that she wishes there were someone who was good at digging to help around in the field.[7] If Link revisits the subterranean tunnels of Eldin Volcano, he will find Guld situated on top of one of the rock pillars, which can only be reached while Link is diving into the area. Guld will comment that the heat is making him unable to find any treasure, and that he would like to have a job in a cooler climate with a beautiful view.[8] Link tells the old Mogma that he knows a place, and Fi calls down Scrapper to transport Guld to Pumpkin Landing. Upon reaching Pumpkin Landing, Guld will be disappointed at first that Link is trying to get him to work in the field.[9] Fortunately, the Mogma becomes more content with the situation, after displaying his digging skills to Kina. As a reward, five Gratitude Crystals form because of Kina's gratitude for Guld's coming to help work in the fields. At night, Guld reveals that he believes Kina is "falling for him" and "eying him". This encourages him to work even harder.[10]

Afterward, Link can talk to the Mogmas back in the Eldin Province about Guld's disappearance. When Link tries to explain to Silva that Guld has gone to the sky, he misinterprets the explanation as an euphemism for Guld's death.[11] In response, Silva vows to make Guld proud, and asks Guld to watch over him from wherever the elder may be.[12]

Mogmas in The Legend of Zelda series
Community content is available under GNU Free Documentation License unless otherwise noted.
Advertisement