Automatically obtained along with the Zora Mask

Replaces the Ocarina of Time while wearing the Zora Mask

"It seems the face of the slightly larger, strange stone changes when the guitar of waves is played..."
— Gossip Stone

The Guitar of Waves is an instrument from The Legend of Zelda: Majora's Mask. It is played by Mikau, guitarist of The Indigo-Go's, and another serves as the instrument for Zora Link. The Guitar of Waves is what appears to be a skeleton of a large fish equipped with guitar strings, giving it the sound of a guitar. It functions similarly to other instruments in the game. As a tie-in with the game, the Jackson Guitar company created ten "Zoraxe" guitars based on the Guitar of Waves.

The Guitar of Waves is also needed to play a part of the "Ballad of the Wind Fish" in the Milk Bar, in order to obtain the Circus Leader's Mask. The guitar is also one of the instruments that can also be used to affect certain Gossip Stones in Hidden Holes scattered throughout Termina Field in order to obtain a Piece of Heart.

The original guitar's owner was the Zora, Mikau, the lead guitar player of The Indigo-Go's. After failing to retrieve Lulu's eggs from the hands of the thieving Gerudo Pirates, Mikau lay dying in the shoals of the Great Bay Coast. He is eventually found by Link, who manages to get him ashore; however, Mikau's wounds are too great. Link heals his soul with the "Song of Healing", and he is able to pass on, leaving behind the Zora Mask. The Guitar of Waves is left on the shore to serve as his grave.

When Link is in his Zora form, the Ocarina of Time will manifest itself as a new Guitar of Waves, separate from Mikau's original. The guitar is needed to learn the "New Wave Bossa Nova" from the rescued Zora hatchlings and to restore Lulu's voice, awakening the Giant Turtle.

When Zora Link plays the Elegy of Emptiness, a statue of Mikau holding the Guitar of Waves appears.

After Link saves Termina, he can be seen playing the guitar together with The Indigo-Go's in the Milk Bar.

The Guitar of Waves vaguely resembles a Desbreko. One possibility is that it was created from the remains of a Desbreko or was simply modeled after one.

Artwork of Mikau playing the Guitar of Waves from Majora's Mask

Render of Link playing the Guitar of Waves

The Zora Statue holding the Guitar of Waves 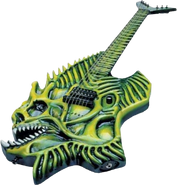 Retrieved from "https://zelda.fandom.com/wiki/Guitar_of_Waves?oldid=493394"
Community content is available under CC-BY-SA unless otherwise noted.