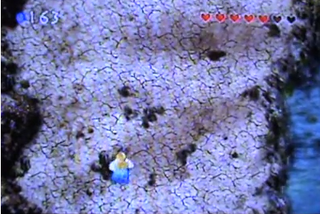 North Gubasha Desert is a coastal canyon located close to the sea. The region can be entered by taking an alternate route through a tunnel shortcut from Ubato Hills near the Shrine of Destiny entrance to the west. It is the location of the Shrine of Air, where a giant, purple condor flies close to some caves and will fly Zelda to the Shrine entrance. At the far end of the northern cliff is a woman. However, she apologizes as she has no information to give.

Close to the condor's location is a cabin occupied by its keeper. He invites Zelda to join him by the fire,[1] adding that the Desert is known to get very cold.[2] Near the tunnel entrance is a Mystic Man who offers Zelda a riddle in finding the Shrine of Air.[3] He then adds that she must look east to find Aviana, the boss of the Shrine of Air.[4]

South Gubasha Desert is located north of the East Crossroads of the East Forest. It is a dry, desert wasteland that sits next to the eastern sea of Tolemac, which can be seen from the coastal cliffs of the region. In the northern half of the desert is a small desert oasis, where a Fairy lives who will replenish all of Zelda's Hearts when approached.

The southern half of the desert is home to a small village. The settlement is mostly deserted with only a couple villagers left. Its villagers, however, are not very welcoming to Zelda, and provide her with no advice and instead discourage her. A man named Myntoll sits in the village square, but refuses to provide Zelda any information to aid her quest.