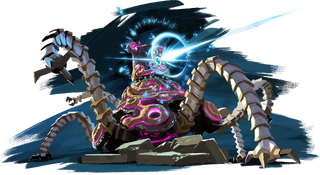 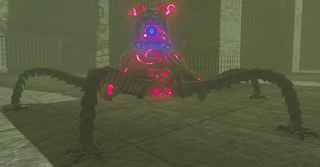 Guardian Stalkers are a type of Guardian found throughout Hyrule, most commonly in the area surrounding Hyrule Castle. They were built by the ancient Sheikah to be used as a powerful weapon against Calamity Ganon.[2] During the events of Breath of the Wild, they are an enemy to Link under Calamity Ganon's influence. Guardian Stalkers have 1500 health and can fire powerful blue laser beams from their eye that can deal up to 58 points of damage. If a target is too close to them, they will attempt to distance themselves in order to fire their lasers; otherwise, they will relentlessly pursue the target until they lose track of it. Sometimes when firing their lasers, they will fire in rapid succession if their health is low enough and Link has not moved too far from when they fired their last laser. These rapid lasers will stop if Link gets hit too far from their last firing point, if Link is no longer within their range, or at a random stopping point.

In Master Mode, Guardian Stalkers will sometimes take slightly longer in their charge up phase before firing their laser to throw off Link's timing.

A Guardian Stalker drops between 10 and 12 of:

A Guardian appears as an Advanced Support Spirit in Super Smash Bros. Ultimate. When used, it increases resistance to weapons.

Guardian Stalkers retroactively debut in Hyrule Warriors: Age of Calamity, running roughshod over Kingdom of Hyrule, just as they did in Breath of the Wild. One is prematurely recruited by Ganon's Malice in order to kill Zelda before she can awaken her powers in Road to the Ancient Lab. Later in the game, they are properly faced as enemies after Ganon awakens on Zelda's 17th birthday and recruits them to his army. In gameplay, they attack the same way as in Breath of the Wild with a few new attacks, such as slamming down into the ground and spinning their bodies. In addition, Fire, Ice, Electric, and Malice variants make their debut as stronger variants. In addition to the enemy Guardian Stalkers appearing in the game, the DLC Pack Pulse of the Ancients includes a playable Guardian Stalker under the name of Battle-Tested Guardian, a nearly decayed Guardian Stalker free of Calamity Ganon's influence (indicated by its yellow body lights in place of the purple ones and a brighter blue light for its eye) where one of its attacks featured is the signature optic laser beam which it can hold and sweep across a wide range.