Not to be confused with Giants. 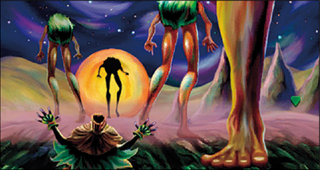 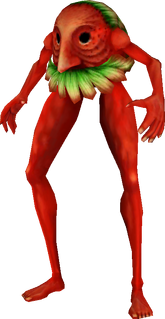 Era of the Hero of Time
The Guardian Deities are characters in Majora's Mask.[1]

They are the guardian deities of Termina that rest in the four cardinal directions of the land of Termina: Woodfall, Snowhead, Great Bay and Ikana Canyon.[2] Every year during the Carnival of Time, the people of Termina ask the Four Giants for a rich harvest in the year to come, wearing masks resembling these deities to honor them.

Anju's Grandmother tells a story about the Four Giants on the Second Day. Before the events of Majora's Mask took place, long ago the people of Termina lived in a single world, united and blessed by the Four Giants living among them.[3] It was during this time that the Giants befriended a small imp, the Skull Kid. However, there came a time when the Four Giants decided to guard and protect the people while dormant. With the world of Termina now split into four parts by the order of the Four Giants, each of the Giants took one hundred steps towards their respective regions, telling their people that if trouble should befall them, they should call them in a loud voice declaring their predicament.[4] This way, their pleas would carry to them, and the Four Giants would come to their aid.[5]

However, the small imp, who had been friends with the Giants even before they created the four worlds, became greatly afflicted with their decision and was woefully stricken by their departure.[6] The imp misinterpreted the Giants' actions, and, feeling neglected and lonely, he began to spread his anger and frustration throughout all of Termina.[7] Devastated with misery due to the imp's malicious tricks, the people pleaded to the Giants for their aid. Angered, the Four Giants, who were still the protectors of the people, ordered the imp to leave the four worlds and return to the heavens; otherwise, the imp would be destroyed by the might of the Giants.[8][9] Frightened and surprised by his friends' reaction, the imp left the lands for the heavens, and peace and tranquility returned to Termina.[10]

The story reflects the events to come, or possibly repeat themselves, in Majora's Mask. The Skull Kid had befriended the Giants and a pair of Fairies. However, eventually, the Skull Kid stole Majora's Mask from the Happy Mask Salesman. Overtaken by its tremendous power, the Mask began to take complete control of the Skull Kid, and using him as a puppet, he pulled the Moon and destined it to crash into Clock Town in order to destroy all of Termina. The four Temples in the cardinal directions of Termina were also cursed, preventing the interference of the Four Giants.

After stumbling into Termina and having befriended one of the Skull Kid's Fairies, Link sets off on an adventure in order to stop the Skull Kid. When Link and Tatl encounter him atop the Clock Tower for the first time, Tael, who was still with the Skull Kid, informs Link and Tatl about the Four Giants who are trapped in each of the Temples.[11] Link and Tatl free the Giants one by one and lift the seal that was put into effect by Majora's Mask and the Skull Kid. The Giants in return, within their mysterious Chamber, teach Link the "Oath to Order", which is to be used to summon the Giants on the eve of the Carnival of Time. Though they agree to help, they also ask Link and Tatl to forgive their friend.[12]

With the Giants free from their seal, Link and Tatl head to the top of the Clock Tower in order to call upon the four gods using the melody taught to them. Together, the Giants use their tremendous power to stop the Moon from obliterating all of Termina. However, in an unexpected turn of events, Majora's Mask tosses aside the body of the Skull Kid and enters the Moon itself to continue with its path of destruction.[13] The Four Giants struggle to keep the now much more powerful Moon from crashing into Clock Town while Link and Tatl venture to the inside of the Moon. After defeating Majora, the Moon vanishes in a beam of light. Soon after, the Giants reassure the Skull Kid that they are still his friends and having done so, the four gods depart again to their respective regions.[14]

In Super Smash Bros. Melee, the Four Giants appear in the background of the Great Bay stage and stop the Moon from falling like they do in Majora's Mask. They also have their own Trophy which can be randomly obtained through either the lottery or one of the player modes.

In the Majora's Mask DLC Pack for Hyrule Warriors, the Four Giants appear as Item Cards in the Termina Map, found by completing the Adventure Battles representing the Temples in Woodfall, Snowhead, Great Bay, and Ikana Canyon. The Giant Item Cards must be used on the Map Battle representing Clock Town to unlock a section of the Termina Map representing the Grassy Playfield inside the Moon. Giant Bokoblins also take the role of the Giants in the Rewards Map Adventure Battle "The Giants Gather".