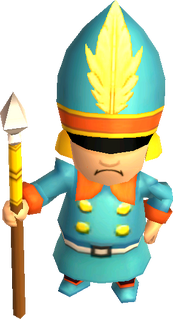 Mr. Guard (TFH)
Guards are recurring groups in The Legend of Zelda series.[1]

In Oracle of Ages, Guards serve Queen Ambi in Labyrnna's past, where they guard the queen's palace. Their armor comes in green, blue, red, and orange. Two Guards standing at the palace entrance to prevent Link from entering.[2] These Guards disappear after the completion of the Mermaid's Cave, allowing Link to enter the palace to save Nayru. The Guards patrolling the courtyard of Ambi's Palace will throw Link out of the palace if they spot him.[3] However, the Guards inside the palace itself will simply attack Link until he leaves the room. The hero can also choose to fight them off; they will flee if hit with several sword strikes.[3] Guards can deal one Heart of damage.

Guards also oversee the construction of Queen Ambi's Tower as well as the search for Mystery Seeds in the Deku Forest. A Soldier in the Tower lends Link a Shovel so that he may help with the construction. After Link finds the Mystery Seeds and talks to one of the Guards, they will escort Link to Ambi's Palace so he can give them to the queen.[4][5]

Guards appear in Hytopia as King Tuft's soldiers. They keep watch of Hytopia Castle, including its entrance and the town gate, ensuring that no suspicious people come in or leave. A Guard named Mr. Guard patrols the castle entrance, whose duty is to only allow in those who match the King's description of the legendary Tri Force Heroes. Their garb is very similar to the Soldiers in A Link Between Worlds, although their uniform's color is light blue instead of red. Their caps also end in a rounded point, they have two rows of buttons down their front.

Their commander seems to be the Captain that is found at the entrance to the Coliseum. Sir Combsly also commands the Witch-Hunting Brigade by order of the king.