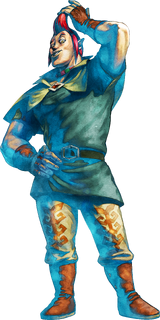 Groose is a character in The Legend of Zelda: Skyward Sword.[2] He is a student at the Knight Academy in Skyloft and a personal rival to Link. He commands a black Loftwing. He also has a crush on Zelda and is jealous of the closeness between her and Link.[3]

Before the Wing Ceremony, Groose and his cronies, Cawlin and Strich, kidnap Link's Crimson Loftwing and lock it away in a hideout located near the Waterfall Cave in an attempt to prevent Link from participating. They also bully Fledge into keeping quiet after he overhears their plans.[4] However, while discussing with his friends how difficult it was to capture Link's Crimson Loftwing, Link happens to overhear.[5][6] When Link confronts him, he expresses his extreme dislike of Link due to his closeness with Zelda, while taunting him about his bird.[7][8] However, Zelda shows up and scolds him, putting a stop to his rude behavior before he and his friends leave.[9][10] During the Wing Ceremony competition, Groose rams Link out of the way as the latter approaches the Loftwing with the Bird Statuette, and Cawlin throws eggs at him to try to stop him from winning, but they are unsuccessful.[11][12] Groose seems to only bully Link out of jealousy of his closeness with Zelda, who he is obviously attracted to.[13]

Following Zelda's disappearance, Groose can be found in front of the mirror in his room, spending his time wallowing in his sorrow and blaming Link for the events that lead to Zelda's fall from the sky and into The Surface.[14]

After the events that occur at the Temple of Time, Link returns to the Sacred Grounds, only for Groose to tail him in the hopes of finding Zelda before Link. After a rough landing,[15] Groose freaks out at seeing the surface, expressing extreme confusion at the sight of small birds,[16] a large number of trees,[17] and even a passing Goron.[18] He demands an explanation from Link,[19][20] who calmly explains the situation to Groose. After calming down and assessing what he has just learned,[21] Groose suggests that they name the world below the clouds "Grooseland."[22] After regaining his composure, Groose goes ahead of Link to the Sealed Temple to ask the Old Woman where he can find Zelda.[23] Much to his surprise, however, Groose is told by the Old Woman that he is not the one who will save Zelda,[24][25] and, after expressing his anger at the idea of Link being the fated hero, storms out of the temple.[26][27]

After Link learns the "Ballad of the Goddess" from the Old Woman, Groose is seen outside the temple shaking in fear as The Imprisoned breaks free of its seal. After Link seals the beast back into its prison, the trio regroups in the Sealed Temple, where Groose decides that the Old Woman is right and that he is of no use to Zelda.[28] He leaves the temple, ignoring the Old Woman's encouragement that he would eventually have a role to play,[29] and, after Link's departure, runs around to the side of the temple, lamenting over his uselessness.[30]

Following Link's departure to obtain the three Sacred Flames, however, Groose manages to come out of his depression and begins work on a device that will help him beat back the Imprisoned should it escape its seal again.[31] By the time Link returns, Groose has cleared away the fences and single-handedly laid down a circular track with a catapult-like device on the rails. When The Imprisoned escapes its seal once more, Groose gets ready to man this device, which he dubs the Groosenator, to help Link seal the beast away.[32] His effort proves instrumental in re-sealing the monster.

When Link returns some time later to find the Water Dragon in Faron Woods, he can only descend to the Sealed Temple. There, he arrives just in time to witness the Imprisoned escaping its seal a third time. Groose intercepts Link at the entrance to the Sealed Grounds to warn him and heads back to the Groosenator. During the battle, Groose knocks the Imprisoned out of the air with the Groosenator, but the impact from its fall causes the ruins around his Bomb Flower stash to collapse, cutting him off from his ammunition.[33] With no other choice, he quickly crafts the idea of launching Link onto the Imprisoned's head to seal it away.[34] After the Imprisoned is sealed again, the Old Woman ponders how Link can get into the flooded Faron Woods. Groose decides to implement the Groosenator in the same way he just had, and launches Link into the woods.[35]

When Zelda finally wakes up following the destruction of the Imprisoned, Groose displays wordless astonishment at finally seeing her again, only to begin openly crying. He soon collects himself and, overcome with joy, happily shakes Link before running over to the Old Woman to hug her. When Ghirahim reveals himself and attacks the group, Groose stands in his way at the Gate of Time, but is kicked out of the way by the Demon Lord along with the Old Woman before he proceeds through.[36]

Shortly thereafter, when Demise is finally resurrected in the past, he casts Zelda's soulless body out of the air, but Groose manages to catch her before she suffers a fatal fall.[37] He gives Link some words of encouragement and relays a message from the Old Woman: Link has enough time to stop Demise and save Zelda's soul.[38] He takes Zelda back to the Sealed Temple, where he and Impa seal her into the room in the back to keep her safe.

Following the destruction of Demise, Groose congratulates Link and Zelda while joking that the story of their adventures should be called the "Legend of Groose."[39] Finally content with his efforts to help, he, along with Link and Zelda, return to their own time to greet the Old Woman at the Sealed Temple, who is then revealed to be an aged Impa. As she fades away into particles of light, Groose, having spent much of the game with her as his only company, expresses the most distress of the three at her death, dropping to his knees on the verge of tears.

After the credits, Groose's Loftwing joins Cawlin and Strich as they fly down to join him. Soon after, the three return to the sky, with Groose waving a final farewell to Link and Zelda before departing.

In Super Smash Bros. for Wii U, Groose appears as a Trophy.

In Super Smash Bros. Ultimate, Groose appears as a Spirit with no ability.

Groose's name comes from the name "Bruce", which evolved to "Goose" and finally "Groose".[40] Groose's Japanese name may be derived from the Japanese word for pigeon, 鳩 (Hato).