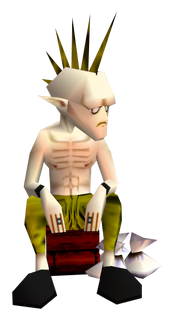 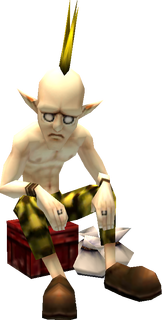 Grog is a character in Majora's Mask.[2]

In Majora's Mask, Grog is the owner of the Cucco Shack in Romani Ranch. He loves his Cucco chicks, but when he hears the rumor that the Moon will crash into Termina in three days, he is filled with sorrow as he understands he will not see his chicks develop into roosters.[3]

Link can help Grog fulfill his wish by parading around the Shack with the Bremen Mask and getting the Cucco chicks to follow him. Once all 10 of them are following Link, they will immediately begin to transform into full-grown Cuccos. Link in turn receives the Bunny Hood from Grog as thanks for helping him out, saying he does not have any more regrets and is completely satisfied.[4]

In Majora's Mask 3D, making the Cuccos grow up a second time will lead Grog to give Link a Fishing Hole Pass.[5]

In common day usage, grog is slang for an alcoholic drink, originally composed of rum and water, known for being a popular beverage among pirates. It could also be a play off of "groggy", as Grog is commonly found sleeping.