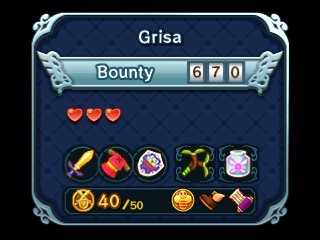 Grisa is the name of one of the 20 possible Shadow Links that can appear in A Link Between Worlds without being met by StreetPass.[1][note 1]

Once Link has spoken to Gramps and enabled Shadow Link Battles, a new signpost signifying the arrival of a Shadow Link will appear at the StreetPass Meadow after every five hours of gameplay, regardless of whether or not the player has received a StreetPass tag. Grisa is one of the pre-generated Shadow Links who can be met by this method.

Grisa wears the Red Mail, wields the Master Sword Lv3 and the Hylian Shield, and possesses the Pegasus Boots, Bee Badge and Stamina Scroll. Despite being one of the most powerful pre-generated Shadow Links, he is tied with Varnis for having the smallest Life Gauge, with only three Hearts. Grisa has 40 Medals won, carries a Nice Tornado Rod and a Bottled Fairy into battle, and has an overall bounty of 670 Rupees.