Zelda Wiki
Register
Don't have an account?
Sign In
Advertisement
in: Reptilian Enemies, Shelled Enemies, Bosses, Bosses in A Link Between Worlds
English 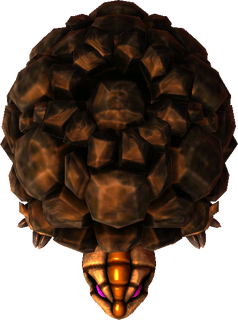 Grinexx is the boss of Turtle Rock in A Link Between Worlds.[name reference needed] It appears as a large turtle with a rocky, volcano-like shell.

The battle against Grinexx takes place on grated metal platform above a pool of lava, with larger holes in its center and four corners. Grinexx begins the fight swimming in the lava underneath the arena. It attacks Link by erupting lava from its back, which passes through the floor grates. During this phase, Link must use the Ice Rod to hit Grinexx as it passes under the larger holes of the arena, while also taking care not to get hit by the erupting bursts of lava. Grinexx will occasionally retaliate by chasing Link around while erupting lava, though this attack can be stopped by using the Ice Rod.

After sustaining enough damage, Grinexx will jump out of the lava and onto the grated platform, closing the holes behind it, and will begin to attack Link directly. Link can damage the monster during this phase by striking its head with the Sword or other weapons. Grinexx will often attack by swiftly extending its neck to bite at Link. It will occasionally tuck into its shell, either to release a devastating explosion, or to begin spinning and sliding around the arena to run Link down. Direct attacks from Grinexx can be deflected with the Shield, but defending against the explosion requires the Hylian Shield. After taking enough strikes to the head, Grinexx will be defeated; a Heart Container will appear and a column displaying Impa's Painting will rise out of the lava.

The name Grinexx is based on Trinexx, the Boss of Turtle Rock in A Link to the Past.