Zelda Wiki
Register
Don't have an account?
Sign In
Advertisement
in: Characters, Characters in The Wand of Gamelon 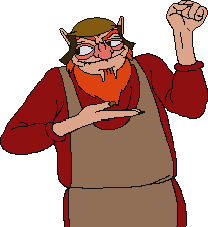 Grimbo is a character in The Wand of Gamelon.[1] He is a man who lives in Washubi Swamp.

Grimbo lives a small hut in Washubi Swamp. He appears to be a wizard, as he can unleash green light from his hands. He expresses skepticism and finds Zelda "puny" to face Ganon. However, he praises her when she responds that she will manage, and asks her to bring him some Hanyu Spore so she can have a "bit more punch." After Zelda brings him the Spore, he takes her glove and throws it and the Spore into an open flame. Zelda is at first alarmed, but Grimbo laughs and reveals that her glove has been transformed into the Power Glove, allowing Zelda to destroy enemies and rocks that would normally require ten Bombs.