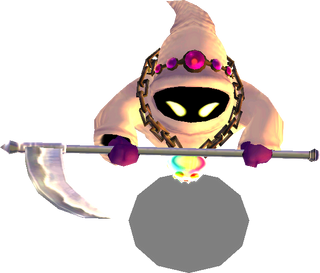 Grim Repoe is the Boss of Palace Noir, which serves as the Mini-Boss of The Ruins, in Tri Force Heroes.[1] It is a giant Poe carrying a large scythe.

The battle is fought in the center of a dusty, old, circular library. When the battle begins, three colored Poes will appear; one green, one blue and one red. The Poes will constantly flee from the Links while cackling madly. To defeat them, the Links can attempt to Dash Attack at them, or team up to corner them, but the Poes can only be damaged by the Link who matches their color. As ghosts, the Poes can move through the bookcases in the center of the room as they flee. After all three Poes are defeated, the Grim Repoe appears in the center of the room and collects their souls inside of a glowing pendant.

Grim Repoe is a portmanteau of Grim Reaper and Poe.

Grim Repoe's Japanese name is a pun on kama, meaning "scythe", and the term "Kamikaze".