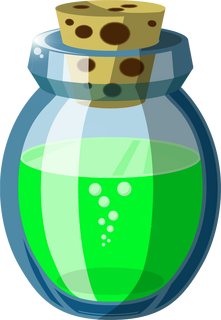 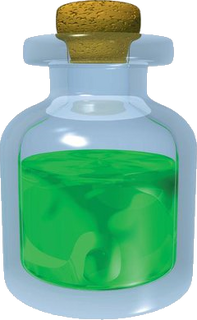 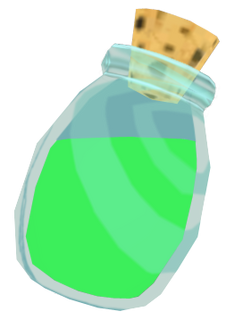 Stamina Potion
Energy Potion
Green Potions,(OoT | MM | TWW)[1] also known as Medicines of Magic or Magic Medecines,(ALttP)[1][2] are recurring Potions in the The Legend of Zelda series. Green Potions are used to replenish Link's Magic Meter. When consumed, they completely fill the Magic Meter regardless of how much Magic is needed. They are generally less expensive than the Red and Blue Potions.

Medicines of Magic can be bought at the Magic Shop in northeastern Hyrule for 60 Rupees in A Link to the Past. These Potions can also be acquired for free by throwing a Bottle into the Mysterious Pond of the Waterfall of Wishing. By answering the Great Fairy's question honestly, she will reward Link by filling the Bottle with Medicine of Magic.[3]

In Ocarina of Time, Green Potions can be bought along with Red Potions and various other Bottle items at the Medicine Shop, which is found in Hyrule Castle Town when Link is a child and in Kakariko Village when Link is an adult. They cost 30 Rupees. They can also be bought from Business Scrubs in various Secret Grottos around Hyrule, along with Red Potions, for 40 Rupees each.

In Majora's Mask, Green Potions can be bought at the Trading Post in West Clock Town, and from Kotake at the Magic Hags' Potion Shop in the Southern Swamp. They cost 30 Rupees at the Trading Post, but only 10 at the Magic Hags' Potion Shop. They can also be bought from a Business Scrub in Zora Hall for 40 Rupees, but only while Link is in Zora form.[4][5][6]