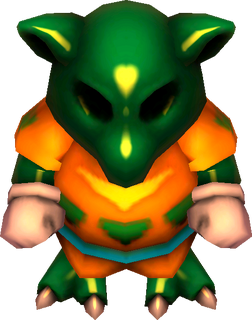 In A Link to the Past, Green Goriyas first appear in the Palace of Darkness and reappear in later Dark World Dungeons such as Ganon's Tower. They copy Link's movement pattern, similar to Arm-Mimics and Shy Guys, moving in the same direction as Link. Green Goriyas can be cornered and destroyed with the Master Sword and are especially weak to the Bow.