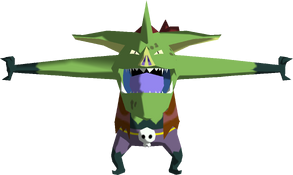 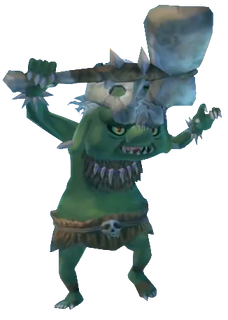 Green Bokoblins are a stronger version of Bokoblin. One first appears a mini boss guarding Link's Sword near the end of Forsaken Fortress, while two are seen guarding a captive Medli in the Dragon Roost Cavern. Many more are later seen throughout the game. They fight with their swords, as well as their shields, and can drop Joy Pendants. Like other Bokoblins, they can pick up other weapons dropped by other enemies.

Green Bokoblins are a type of dungeon and cave-dwelling Red Bokoblin whose skin have turned green from a lack of sunlight.[3] They possess the same strength as Red Bokoblins but have slightly less health.[1]

Green Bokoblins are the standard and weakest variety of Red Bokoblin. Like other Red Bokoblins, they move to the beat of the music and can move on every other beat, dealing damage to Cadence, Link, Yves, or Zelda if they collide with them. Before moving, they put their arms up for one beat before hopping onto an adjacent tile on the following beat. Their pattern is based on the Skeleton enemy from Crypt of the NecroDancer.

They share the clothing style of their seafaring counterparts in The Wind Waker, as they wear blue vests and pink shorts with skull belt buckles on them, but with the addition of wrist guards and earrings. Their physical appearance, on the other hand, is a combination of their designs from Breath of the Wild and Skyward Sword, sporting the same tiny horns and muscular bodies from Breath of the Wild, but possessing the small ears and earrings of Red Bokoblins from Skyward Sword.

Symphony of the Mask features Skull Green Bokoblins, but they act the same as in the main game.