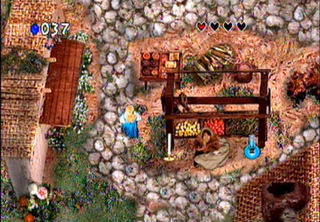 Bone
Candle
Diamond
Flute
Jade Amulet
Life Potion
Pyros
Rings of Fire
Short Axe
Turquoise Ring
Great Wimbich is a location in Zelda's Adventure.[name reference needed] It is a bustling town located in central Tolemac. It is home to many shops that sell a variety of items and Spells.

Great Wimbich is a small town located in central Tolemac. It is situated close to the Meadow of Skotness, and sits between the Skotness River and the river of the Forest of Torian to the north. As there is no proper bridge crossing the rivers, the town can only be accessed by crossing a fallen tree log near one of the houses. The town consists of six bungalows lined with hedges, of which only four can be entered. In the center is the town square, where a small market stall has been set up by the Town Merchant. She sells Zelda a Candle for 100 Rupees and a Life Potion for 200 Rupees. She and her husband once ran a locksmith forge for Warbane the dragon, until Warbane had joined Ganon.[1] With the forge closed, the couple were forced to become merchants in town.[2]

In the north is a street called Upper Street,[3] where three additional shops can be found. The red shop is the town's general store, and is run by the Shopkeeper and the Knave. The shopkeeper's dog and a bored, lounging man can be found outside of the shop. The shop only sells one item, the Bone, which can be given to the dog outside for the Short Axe Spell. The white shop covered in vines is home to Madame Kriggle's magic shop, where she sells Zelda a variety of magic spells, including the Rings of Fire, Turquoise Ring, and Jade Amulet Spells. Lastly, the blue shop is the town smithy. The Blacksmith inside complains that the town steals from him, despite living an honest life.[4] Zelda can bring him a piece of Coal to produce the Diamond, which gives Zelda 999 Rupees. The Blacksmith also sells a Candle 100 Rupees.

A yellow house in the east is home to Eric and Ian the twins and their father. Standing next to their house is Yvonne, a music-loving woman who gives Zelda a Flute to help her. The Flute can be played to a snake outside of town near a pond to make it combust, subsequently dropping the Pyros Spell.