Not to be confused with the Great Plateau Tower Region. 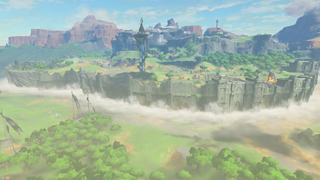 The Great Plateau in Breath of the Wild

Hyrule
The Great Plateau is the starting Region in Breath of the Wild.[1]

The Great Plateau is a large region of land that is secluded from other parts of Hyrule, as its steep slopes prevent anyone from traveling to and from it without special equipment, such as the Paraglider.[2] The only active inhabitant is the Old Man, a mysterious elderly fellow with a deep knowledge of the Sheikah.[3]

According to the Old Man, the Great Plateau is the location where the Kingdom of Hyrule was founded.[4] As such, it is a sacred place where no monsters are meant to roam.[5] However, due to the Calamity Ganon's growing influence, it has been corrupted by enemies. The Great Plateau features numerous changes in Master Mode, such as the inclusion of a White-Maned Lynel in the forest north of the Old Man's Cabin as well as the addition of several Treasure Chests guarded by Sky Octoroks. When traversing, you will find several camps with no inhabitants.

The Eastern Abbey is a ruin surrounding Ja Baij Shrine on the eastern edge of the Great Plateau. The Eastern Abbey contains several broken down Guardians, three of which are still active and will come alive to attack Link if he comes within range of them. The formal entryway to the Ja Baij Shrine is blocked by a bombable wall, which can be broken with a Guardian's laser, Bomb Arrows or with the Remote Bomb Rune after retrieving it from inside the Shrine. There is also a metal wall you can lift with Magnesis, with which you can place it on top of the wall to make a ramp.

The Forest of Spirits is a heavily-wooded area in the north of the Great Plateau. It is lush with wildlife, inhabited by Boars and birds as well as a plethora of organic plant-based Materials. An uninhabited camp containing a campfire and a Cooking Pot can be found in the eastern reaches of the Forest of Spirits, allowing Link to cook various Foods with the Materials littered across the Forest floor. This camp also contains basic weaponry, such as the Traveler's Bow and a Torch. Also found in the Forest of Spirits is an enormous hollow log with the top rotted away, inside which a tall yellow flower can be found. If Link tries to approach this flower, it will vanish, and reappear a short distance away. After it does this several times, it reveals itself to be a Korok. Another Korok can be found by lifting the rock on the top of the small, strangely shaped hill.

A Stone Talus can be found in a rocky clearing in the Forest.

Mount Hylia is a cold and snowy region in the Great Plateau, based beside the River of the Dead. It is dotted with several Bokoblin camps, and is inhabited with ice-themed enemies. Keh Namut Shrine lays near a frigid pond in northwestern region, and Owa Daim Shrine rests on the far eastern border of the mountain. After raising the Great Plateau Tower, if Link climbs up to its peak in the center, he is greeted by the Old Man, who teaches him about the Scope ability on Link's Sheikah Slate.[7] If Link has climbed to the peak using only Foods that give him Cold Resistance, the Old Man will be impressed with his ability to travel so far in the cold without proper attire, and gives Link the Warm Doublet.[8] On the stone wall near Keh Namut Shrine, a Korok can be found hiding inside a chunk of ice.

The peak contains a cairn from which Link may find minerals and similar Materials through searching.

River of the Dead

Main article: River of the Dead

The River of the Dead is a frigid body of water fed by Mount Hylia. It is located on the western portion of the Great Plateau. There are two magnetic pieces, which can be used to make a makeshift bridge. There are some chests in the up the River.

The Shrine of Resurrection is where Link first awakens, upon hearing a voice pleading for his return to save Hyrule. It is situated in the center of the Great Plateau.

The Great Plateau bears four Ancient Shrines: Ja Baij Shrine, Keh Namut Shrine, Oman Au Shrine and Owa Daim Shrine. Link is tasked with the responsibility of clearing each of these Shrines in order to retrieve the treasure, the Spirit Orbs, granted by the eponymous Monks residing in each Shrine. In exchange for this treasure, the Old Man offers his Paraglider,[9] the only tool capable of allowing Link to leave the Great Plateau. After the Expansion Pass is purchased, three chests appear on the Great Plateau. One is found on the top of a wall within sight of Ja Baij Shrine, another to the left of Oman Au Shrine, and the third on the thick wall bordering the Plateau near Keh Namut Shrine. These chests are of a purple and silver coloration, and have the letters "EX" on the front. They contain the Nintendo Switch Shirt, a Ruby, and five Bomb Arrows, respectively.

The Temple of Time is situated near the center of the Great Plateau, at the foot of the River of the Dead. With the decay of the Kingdom of Hyrule, it has fallen into disrepair, but it was once used frequently for sacred rites.[10] Inside rests a Statue of the Goddess, Hylia, which Link can pray to in order to receive her blessing.[11] After Link has four Spirit Orbs, he can receive a Heart Container or Stamina Vessel from the Goddess.

The Old Man's Cabin is a small building based in the southwestern region of the Great Plateau.