Zelda Wiki
Register
Don't have an account?
Sign In
Advertisement
in: Locations in Oracle of Ages, Rolling Ridge, Towers, Locations 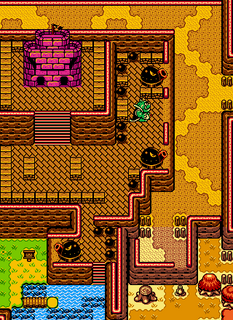 Moblin's Keep from Oracle of Seasons

In Oracle of Seasons, the Moblin's Keep is built on a rise surrounded by cannons, west of Sunken City. When Link enters the vicinity of the keep, the Great Moblin will appear on the rise, and will start firing Bombs at Link. The keep itself can be accessed from the bottom left corner of the area, reached by passing through Natzu. Once he has infiltrated the keep, Link will engage in battle with the Great Moblin. Once the Great Moblin is defeated, the keep will be destroyed. Afterwards, the Great Moblin and his minions will retreat to an abandoned house in Sunken City. At the ruined keep, Link will find a Treasure Chest containing a Piece of Heart. In a Linked Game, a friendly Moblin also appears carrying the Tokay Secret. Link can blow up the house that the Great Moblin and his minions move into by using a Bomb or Ember Seeds on the pile of Bombs in the room. The house will be rebuilt after a certain amount of time.

The Moblin's Keep is one of the few areas of Holodrum which has no season stumps and remains in the same season at all times. Unlike in Oracle of Ages, destroying the keep is not required to complete the game.

In Oracle of Ages, the Great Moblin builds his keep on Rolling Ridge in the present.[3] The area becomes overrun with Moblins, harassing the Gorons of Rolling Ridge.[4] Because of the keep, the Gorons are unable to grow their special Bomb Flowers,[5] which the Great Moblin is stealing for his own use. Link must infiltrate the keep and defeat the Great Moblin in order to destroy the keep. Once destroyed, the Gorons will thank Link for his help and reward him with a Bomb Flower of his own.[6] The Bomb Flower can be used to free the Goron Elder from under a boulder in the past.[7] The Elder will then give Link the Crown Key to open the Crown Dungeon. After the keep is destroyed, a passageway to the entrance of the dungeon will be revealed.

The Moblin's Keep is also referred to as the "Great Moblin's Palace."