Not to be confused with King Moblin from Link's Awakening. 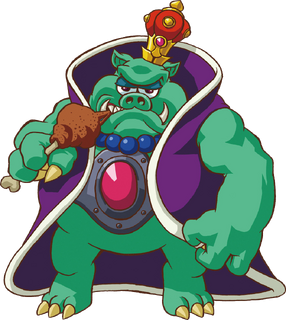 The Great Moblin is a recurring Sub-Boss in The Legend of Zelda series.[3] He is depicted as a large Moblin that leads a troop of smaller ones.

The Great Moblin is the boss of a gang of Moblins who terrorize the populace of Holodrum and Labrynna. In whichever game is played first, Link drives him out of that land. If the two games are linked, he goes into the other land, where Link can further his plot. If the games are not linked, he will not recognize Link in that second land.

In Labrynna, he builds a keep in the mountain, and prevents the Gorons from growing Bomb Flowers so that he can sell his hand-made Bombs.

In Holodrum, he builds another keep, as more of a fortress with cannons in the walls, shelling anyone who comes near.[4] Link finds his minions surrounding Dimitri, intending to sell him.[5] To rescue Dimitri, Link must pay 80 Rupees.

If Link is in Holodrum while playing a Linked Game, the Great Moblin kidnaps Princess Zelda, hoping to make a profit.[6] After a brief skirmish he flees back to the Moblin's Keep.

After Link destroys the Moblin's Keep in Holodrum, the Great Moblin will move into an abandoned house in the south-eastern corner of Sunken City. There, he and his minions make Bombs, restoring their funds to rebuild the Keep once more. If Link drops a Bomb or an Ember Seed on their pile of Bombs and escapes, the house explodes, making the Great Moblin and his henchmen flee. They soon return and rebuild the house, and continue making Bombs once more. Link can blow up this second house too, making them flee again. If Link tries to ignite their pile of Bombs a third time, the Great Moblin will discover his actions.[7] They will then throw Link into the house and proceed to run away as it explodes, killing Link.