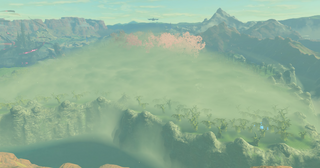 The Great Hyrule Forest is a sublocation of Central Hyrule in Breath of the Wild.[1][2][note 1]

The Great Hyrule Forest is a large wooded area in northern Hyrule, consisting of the vast majority of north Central Hyrule. The area is characterized by its woodlands and rolling hills that extend to the Eldin Mountains further north. Its most notable landmark are the Lost Woods in its center, a dense forest that is surrounded by an enormous gorge known as Lake Mekar. Along with the Lost Woods, the Great Hyrule Forest consists of multiple smaller woodlands that together make up the entire Forest.

The area borders Hyrule Field to the south, Hebra to the west, and the Eldin Canyon directly east. A trail paves between the Forest and Hyrule Field, connecting the Forest to Eldin, and, further east, the Akkala and Lanayru Regions. The Woodland Stable sits between the Forest, Hyrule Field, and Eldin Canyon.[6] The trail going north leads through its smaller woodlands before finally reaching the Lost Woods. These enchanted Woods are covered in a dense fog that causes travelers to lose their way.[7] The Lost Woods themselves surround the Korok Forest, where the Koroks and the Great Deku Tree thrive. The Korok Forest also houses the Master Sword, left there by Princess Zelda after the losing battle against Calamity Ganon 100 years ago. The woodlands end at the Lost Woods, and give way to rolling hills and mountains further north before eventually reaching the Thyphlo Ruins; the Forest's final stretch.

The Aldor Foothills are a series of ascending rocky levels of land that act as a transition from normal land to Mount Drena. A Blue Hinox rests on the eastern side of the Foothills.

Elma Knolls is a multi-leveled rock formation on the southwest edge of Lake Mekar. The top of the plateau contains multiple Koroks and provides a view of both Hyrule Castle and the Great Hyrule Forest.

Korok Forest is the epicenter of the Great Hyrule Forest. The Forest is incredibly green and lush, and filled with many kinds of animals and Koroks. The Forest is the hub for all the Korok Trials and where Link can attempt to retrieve the Master Sword under the Great Deku Tree's watchful eye.

Lake Mekar is a large body of water containing Mekar Island and the Lost Woods. The Lake isolates the two islands from any land-based connection other than Minshi Woods.

Lake Saria is the last part of the Korok Trial that creates access to Kuhn Sidajj Shrine. Located in the southwestern corner of the Lost Woods, the Lake requires a raft to cross successfully.

The Lost Woods acts a gateway to Korok Forest. The Woods are very foggy and populated by many woodland creatures. The Woods may be navigated by following the path of the wind, as indicated by the flying embers of Torches. Unless the correct path is taken, the Woods will prevent his entry and send him back to the beginning of the forest.

Mekar Island is a small Island directly west of the Lost Woods. Populated only by a single dead tree, the island has very little to offer other than a view of the misty forest.

Mido Swamp is a muddy blockade to Maag Halan Shrine in the northeastern corner of the Lost Woods. This Swamp is surrounded by enemies that fire down on Link as he attempts to cross it.

The Military Training Camp is a swampy, dilapidated series of broken wooden towers that surround the Woodland Tower. It is inhabited by many enemies but contains much treasure for the brave explorer.

Minshi Woods acts as the pathway into the Lost Woods and transition from Eldin to the Great Hyrule Forest. A grassy pathway lacking in enemies, Minshi Woods is a peaceful buildup to the mysterious forests inhabited by Koroks.

Rauru Hillside is the section of land to the south of the Great Hyrule Forest, across from Lake Mekar. The hillside provides a view of the surrounding area, especially the Rauru Settlement Ruins.

The Rauru Settlement Ruins are a set of destroyed buildings along the path south of the Military Training Camp. The ruins contain a Treasure Chest, but are guarded by an Electric Wizzrobe.

Rowan Plain is an open, grassy area west of Serenne Stable. Horses graze among the grass, but the real interest of the area comes with the Koroks and the Stalnox that can be found in the trees around the Plain.

Serenne Stable, located just south of the Forgotten Temple, is one of many Stables in Hyrule where Link can retrieve and board one of his Horses. Link can also Cook, gather wood, and find Rupees at this Stable. There is also the "Leviathan Bones" Side Quest in Serenne Stable where Link must photograph the skeletons of the three Leviathans found throughout Hyrule.

Typhlo Ruins is an island north of the Lost Woods that contains an elaborate Ancient Shrine puzzle. Shrouded in near complete darkness, the Ruins require Link to find Ketoh Wawai Shrine using only the light he can create.

The Woodland Tower is the Sheikah Tower for the Region surrounding the Great Hyrule Forest. The Tower is in the northern section of the Military Training Camp guarded by a Fire Wizzrobe. There is also a large stone skull on top of the Tower.