Not to be confused with the Bridge of Hylia from Breath of the Wild. 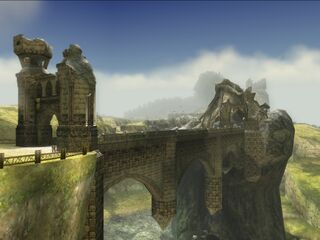 The Great Hylian Bridge as seen in Twilight Princess

The Great Hylian Bridge is recurring location in The Legend of Zelda series.[1][name reference needed]

Link later crosses the bridge again in his human form while escorting a wagon, carrying Ilia, Telma, and a mortally sick Ralis to Kakariko Village for medical care, as the Bridge of Eldin has been destroyed by Shadow Beasts.[2] En route to the village, King Bulblin stands in Link's path on the bridge and challenges him to a jousting match of sorts, to redeem his defeat at the Bridge of Eldin earlier in the game. By defeating the Bulblin King the second time, Link is able to cross the bridge and continue to Kakariko Village.

The Great Hylian Bridge is also home to both male and female species of golden mantises. The female mantis is located south of the bridge against the rock facade immediately after the bridge, while the male counterpart flies around the bridge overhang near its north side. There is also a hidden chest with an orange Rupee on the northern part of the bridge which Link can reach through using the Clawshot on nearby vines.

In Link's Crossbow Training, the Great Hylian Bridge appears in a Defender Mode scenario in Stage 3. The camera angle is fixed with a view away from the actual bridge towards the surrounding countryside. Kargaroks will continuously fly towards Link and attack by spitting rocks. As with other Defender Mode stages, few additional point-giving objects can be found.